Don't ignore Steve Smith in your Dream11 Fantasy team and pick him.

The 2nd T20I of the three-match series between Australia and Pakistan will be played at the Manuka Oval in Canberra.

The rain robbed Australia off a victory in the first T20I against Pakistan at the SCG. Even the 20-minute break between the innings was too much and Aaron Finch also questioned the same after the match. Nevertheless, the hosts continue to be the favourites to win the second of the three-match series to be played in the national capital. All bases look covered for Australia but their middle-order stays untested after four matches into the home season.

Meanwhile, Pakistan looked set to post a score close to 150 before the rain intervened and the encounter was reduced to 15 overs per side. Babar Azam continued to pile on runs at the top of the order but the others need to support him and especially Fakhar Zaman who has been extremely poor opening the innings this year in the T20Is. Bowling looked undercooked and they couldn’t apply any pressure on the opposition during the 3.1 overs of action.

The visitors shouldn’t leave any stone unturned in all the departments to have a chance of defeating full-strength Australia at home.

The forecast for Tuesday is absolutely clear in Canberra for a cricket match to take place. There is no chance of rain coming down at all and the temperature will hover around 10-14 Degrees Celsius according to AccuWeather.

This is the first Men’s T20I to be played at the Manuka Oval. But it hosted a couple of Big Bash League (BBL) matches last season. Traditionally it is a good batting surface and these two matches also indicate the same with the scores around 170-180 expected to be achieved in this game as well. The team winning the toss might opt to bowl first.

David Warner and Aaron Finch should be automatic top picks in your Dream11 Fantasy team. Steve Smith is also one of the top players who can score a half-century in case a wicket falls early. In the bowling department, Mitchell Starc is the must-have player in your team.

For Pakistan, Babar Azam should be part of your team at any cost. It is tough to handpick any other player from their team as they are inconsistent as it was visible in the first T20I. 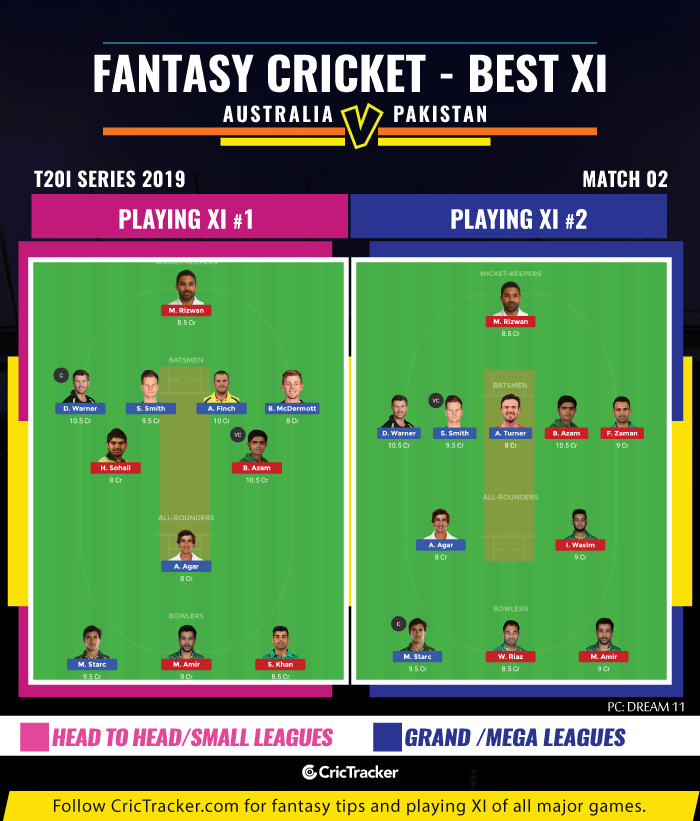 Don’t ignore Steve Smith in your Dream11 Fantasy team and pick him. He can give you points on the field by taking catches and has the ability to score runs if the wicket falls early. So he could be the back up for you if either of Warner or Finch falls early.

Shadab Khan can turn out to be a surprise pick as he is yet to bowl on this tour. If he gets a little bit of turn from the surface, the leggie can trouble the opposition.

Australia is expected to win this match.