The Melbourne Stars has struck prime form and are on course for qualification.

If ever there was a right time to peak, this is it for the Melbourne Stars. And they are doing just that. With 12-points in the bag and three-matches to pay, the Stars are nicely poised to make it to the knock-out stage. The only team that poses a threat for them is Sydney Thunder.

That said, the Thunder have just one game left and are a point behind the Stars. Barring an unlikely scenario of the Stars losing all their remaining matches and the Thunder winning their final game, the Stars appear on course to go through. But this appears highly unlikely as the Stars are in the midst of a 3-match winning streak and carry good form going into Match number 51.

Note that Usman Qadir and Shaun Marsh will not play this game for Perth. This paves the way for Nathan Coulter-Nile and Michael Klinger. Half-way through the series, Klinger was dropped owing to poor form and he now has an opportunity to put up a score to redeem himself.

The Scorchers haven’t really set the stage on fire this season and they will be utterly disappointed with their performance. If anything, being eliminated should take the burden off their shoulders and in doing so, the Scorchers should put up a better show with no pressure binding them.

Adam Zampa and Liam Plunkett have displayed great form with the ball in recent games. They will know all too well that Perth has collapsed in a heap several times this season and the Melbourne duo will be salivating at the prospect of bowling to the beleaguered Perth batsmen.

Marcus Stoinis has been a real star for Melbourne this season. The side has been buoyed by Stoinis’ all-round performances every time the chips have been down.  Note that Tom O’Connell has been dropped and Jackson Coleman has been called up in his place.

Ben Dunk, Glenn Maxwell and Ashton Turner will be strong batting picks for your Fantain XI. Dunk has been opening the batting with Stoinis and has come good on several occasions

Amidst the ruins, Cameron Bancroft has held his own this season. He would make a good choice for your wicket-keeper batsman pick

Marcus Stoinis and Dwayne Bravo would be superlative all-rounder options for you to consider. While the latter needs little introduction, the form of Stoinis speaks for itself

Jason Behrendorff and Adam Zampa are ‘must-have’ bowlers in your line up. Also, Liam Plunkett will be able to exploit the seaming track at Perth and Andrew Tye’s variations will come in handy during the middle overs as well. 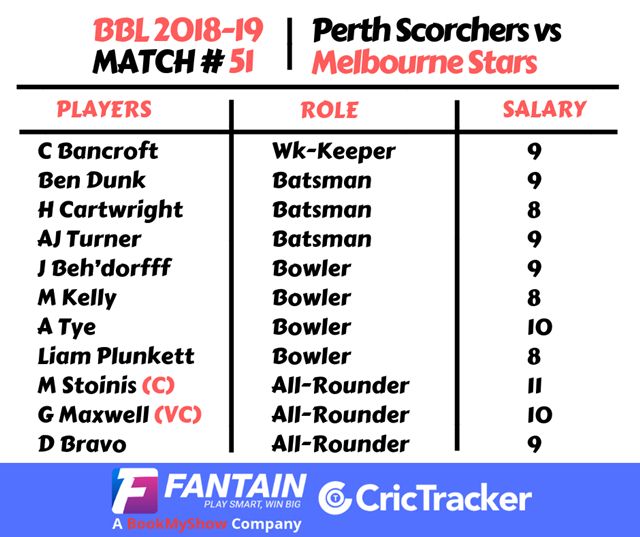