Andre Russell bowled only 0.3 overs in the last match before he pulled out due to an injury.

The Rajshahi Royals have lost a bit of momentum out of the blues in the BPL 2019-20. In their last two matches, they failed to chase down targets. Last time, Rangpur Rangers beat them by 47 runs. The two teams are again set to lock horns, this time at the Sylhet International Cricket Stadium. The Sylhet leg will see four games taking place from Thursday, January 2 to Saturday, January 4.

Despite the defeats, the Royals are in a comfortable enough position with five wins. As far as Shane Watson’s Rangers are concerned, they are peaking in the business end of the tournament. Having won three out of their last four matches, the Rangers are high on confidence. Another victory will help Dawid Malan and Co overtake the Cumilla Warriors to the fifth spot in the points table.

The pitch in Sylhet was slow to start with last time around. But as the BPL progressed, some high-scoring affairs took place. Bearing in mind the inconsistent nature of the strip, teams are likely to field first after winning the toss. The conditions will mostly be hazy. The temperature will be around the 25 degrees Celsius mark. The humidity isn’t concerning with the numbers in the 40s and 50s.

Overall the Royals batting has done well. But their slump in form can be a tad concerning. Shoaib Malik has gotten back-to-back ducks and he will be desperate to make amends. He opening duo of Liton  Das and Afif Hossain have to be on top of their game. The middle strained the last two times.

The onus will be on Ravi Bopara and Andre Russell to deliver. There’s also doubts over whether Russell will bowl or not. Against the Rangers, he pulled out after bowling only three balls. The Royals; tactic of using eight to nine bowlers in every match also seemed to have backfired a bit on them.

The biggest positive for the Rangers has been Mustafizur Rahman’s form. He is their leading wicket-taker, having picked 12 wickets at an economy of 6.40. Mohammad Nabi has seven wickets, but at an economy of 6.86. Gregory has 11 wickets to his name and has looked in pretty good rhythm.

Gregory also has 196 runs under his belt. Cameron Delport has found his mojo as well. But the Rangers have depended heavily on Mohamamd Naim, who has 269 runs at an average of 114.95. Taskin Ahmed got four wickets in the previous game and found some much-needed momentum.

The prediction is for Rangpur Rangers to win the match. 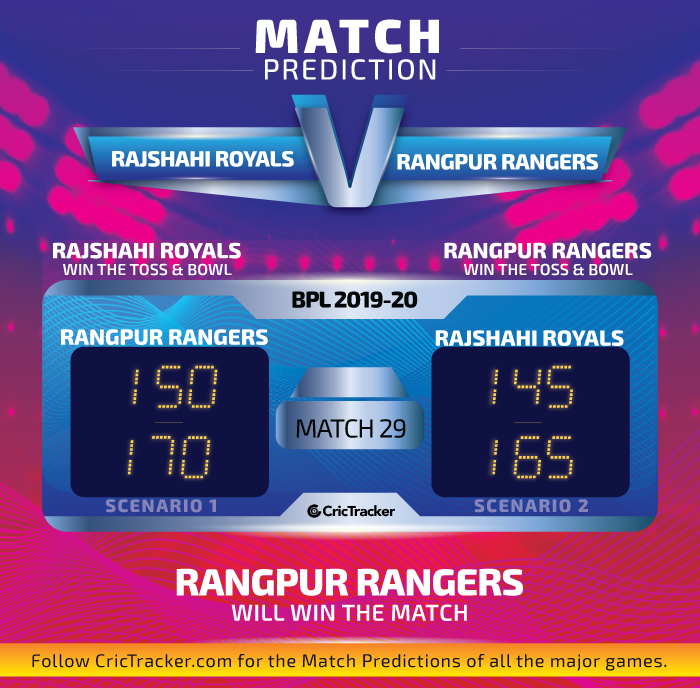