Which team can strengthen their hold on the top two positions?

The Chittagong Vikings will be up against the Comilla Victorians for the 35th match of BPL 2019. The Vikings have got slightly off the track with losses in last two games. Their net run rate took dumping after these defeats. The side will be looking forward to getting back to the winning ways soon. Also, they need some massive wins in their last three league games of the season as they’d surely want to finish in the top two.

The Victorians, after a splendid performance against the Titans, have ascended up to the top of the points table. With six wins in nine games, they will also be eyeing one of the top two spots now. The team will be back in action within 24 hours and this could affect their performance a bit. But, the emphatic win against the Titans is sure to keep the boys pumped up and they’ll look forward to the challenge.

The 35th match of the Bangladesh Premier League (BPL) 2019 will be played between Chittagong Vikings and Comilla Victorians at the Zahur Ahmed Chowdhury Stadium in Chattogram.

The Comilla Victorians belted 237 runs in the game against the Khulna Titans at this venue. Stay away if you are a bowler as it is an absolute road to bat on. The outfield is also fast and it is quite easy to clear the ropes in Chittagong.

Evin Lewis has recovered for his hamstring injury and scored a century against Khulna Titans. Robbie Frylinck could miss the remainder of the home-leg matches.

Shamsur Rahmanhad a decent run in BPL 2019 thus far. In the five innings where he batted, he registered scores of 34*, 1, 15, 48, 28*. However, he didn’t feature in the first five matches of Victorians. He could be your power pick for the upcoming game.

Mushfiqur Rahim, Thisara Perera and Evin Lewis can be the first choices as the captains of your side. All these three players have performed exceptionally well thus far. You can pick one player between Tamim Iqbal, Mohammad Shahzad and Cameron Delport as your vice-captain. Shahid Afridi and Imrul Kayes can be your alternative options. 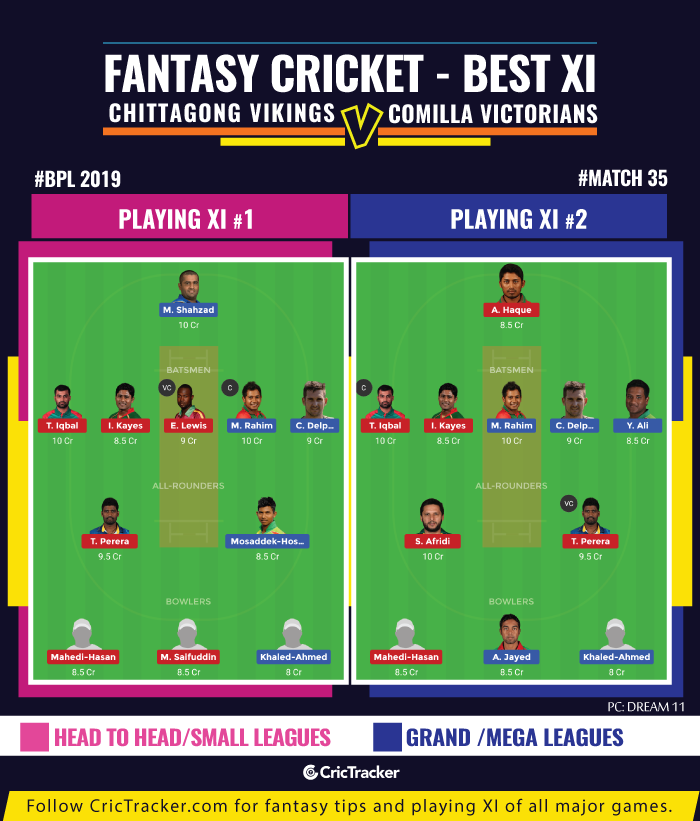 Forced to remove Afridi in Team 1 and Shahzad in Team 2 due to lack of credits. Both of them can be picked in the same team if only one of Kayes, Delport and Lewis are picked.

The Comilla Victorians are expected to win the match.