Colin Munro churned out a 56-ball 90 the last times these two sides met at the Queen's Park Oval. TKR won the game by 67 runs.

The playoffs spot in this edition’s CPL have already been sealed. But there’s a lot to play for in the last four encounters. The Guyana Amazon Warriors and the Trinbago Knight Riders are set to lock horns at the Queen’s Park Oval. A victory for the hosts would decide the fixtures of the playoffs. A win for the Warriors would confirm them the top spot. TKR will still need to fight for a top-two spot.

The Kieron Pollard-led unit started with three victories at home. However, the Knights are winless for the last three games. Their last defeat by 63 runs versus the Barbados Tridents would’ve dented their confidence in a significant manner. On the contrary, the Warriors are in a zone of their own and are unbeaten after seven matches. With an NRR of +1.693, they have been the standout performer.

The first three games of the season saw scores of above 150, which suggests that it’s good for batting. In the two matches under the lights, the chasing teams had to face defeats. Hence, batting first after winning the toss should be the way forward as the track may get slower. There will be clouds with no prediction of rain. The temperature will be around the 27 degrees Celsius mark.

The Knights should bring in Chris Jordan in order to strengthen their bowling. James Neesham is their leading wicket-taker with nine scalps, but has an economy of 12.05, the most expensive bowler in TKR this season. Ali Khan has also tended to leak runs at an alarming rate of 10.70. Skipper Pollard has tried his best thus far. The Trinidadian has six wickets to go with 173 runs at an average of 57.66.

Khary Pierre and Sunil Narine has a combined tally of 11 wickets, but need more support. In the batting area, a lot will depend on how Lendl Simmons delivers. A quick start from Narine is always a bonus. The onus will also be on Colin Munro, who has shown good form this season, having scored 147 runs at 73.50. The likes of Darren Bravo and Denesh Ramdin need to be on their toes as well.

The Warriors haven’t had to make much changes in their batting lineup over the course of the tournament. Brandon King has been a surprise package, scoring 275 runs at an average of 55. His last four scores read 49, 59, 51* and 81*. He has got the apt support from Hemraj. Hetmyer is fighting for form a wee bit. Pooran hasn’t got much chances owing to the stupendous form of the top order.

Malik averages a stunning 90, having notched 180 runs. In bowling, Tahir has gotten two wickets in each of the four games he has played. He has the best bowling average of 10.37 in the Warriors along with an economy of 5.18. Green has managed to build pressure, having picked up 10 wickets at 6.71. Shepherd will be looking to make amends after he gave away 51 runs in the last game. 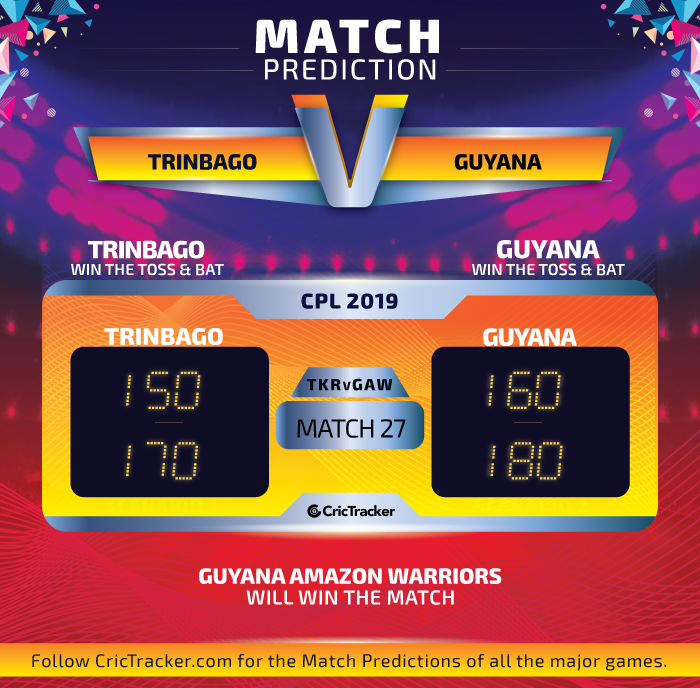