The Kings will be going into the game on the back of a hefty 120-run loss at the hands of Jamaica Tallawahs.

Saint Lucia Kings and Trinbago Knight Riders are set to lock horns in Match No.7 of the 2021 CPL on Sunday, August 29 at the Warner Park in St Kitts. The Knights made a jittery start after Guyana Amazon Warriors beat them by nine runs.

However, TKR made a comeback against Barbados Royals. On the back of Isuru Udana’s five-wicket haul and Kieron Pollard’s half-century, the Knights stormed to victory.

The Kings, on the other hand, must be low on confidence after the hefty 120-run loss at the hands of Jamaica Tallawahs. Their overall head-to-head record against TKR isn’t the greatest either.

The pitch at Warner Park has been a sporting one thus far. In one of the games, the team, batting first registered 255. But in some games, teams strained to go beyond the 140-run mark. In the morning games, chasing has been tough.

Lendl Simmons is the all-time leading run-scorer in the history of the CPL. However, in the ongoing edition of the tournament, he hasn’t quite fired. In the first two games, the right-hander faced only five balls and scored 10 runs. But keeping in mind the talent and experience he has, Simmons is expected to make a comeback in the next game.

Akeal Hosein has been a tough nut to crack for the opposition batters in the CPL. The left-arm spinner has picked up three wickets from the two matches he has played in. However, his economy rate of 4.37 is the best among his teammates in the event. Not to forget that Hosein has the potential to play the big shots in the death overs. 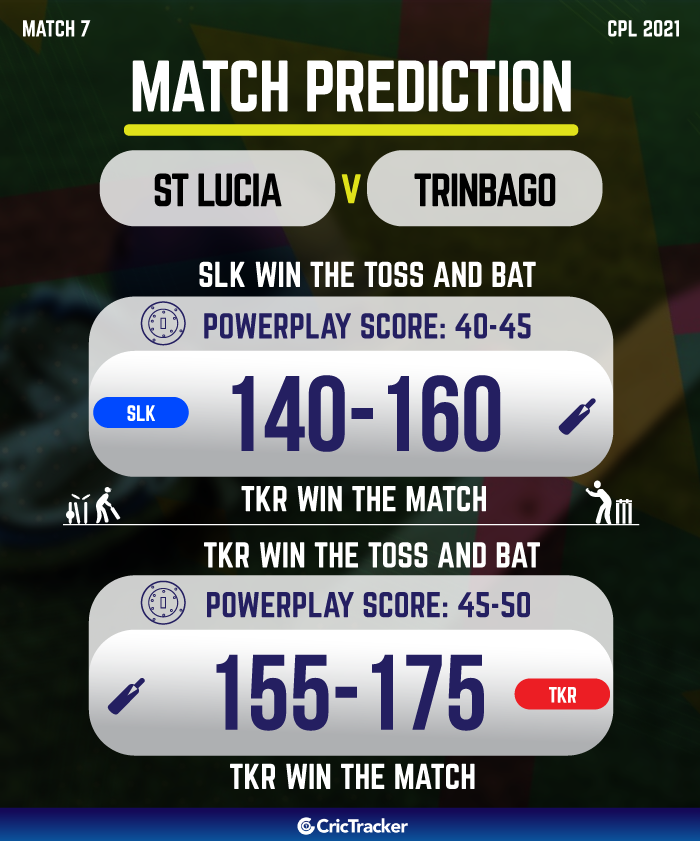