England vs India, 1st Test, Match Prediction – Who will win the match England or India?

After the jaw-dropping contests in the T20I and the ODI series’ between England and India, Joe Root and Virat Kohli’s men will now lock horns in the first of the five-match Test series at Edgbaston in Birmingham from August 1. However, the visiting team’s records at the venue in red-ball cricket doesn’t support them by any means as India haven’t won a Test at the venue in six attempts while losing five of them.

The Brits, on the contrary, have emerged victorious in five of their last six Tests at the very stadium. Moreover, they haven’t lost at Edgbaston ever since their defeat against South Africa back in July 2008. Nevertheless, England’s record in Test cricket over the last one year hasn’t been great and India, being the top-ranked team in the format, have a golden chance to give them a run for their money.

The pitch historically is known to assist the seam bowlers, but with the summer at its peak, the spinners can also make their mark. Test cricket in Birmingham hasn’t been a witness to high-scoring encounters and it’s expected to be no different even this time around. India would be hoping for the conditions to favour their spinners, who were phenomenal in the limited-overs matches.

Keaton Jennings, who played the second Test against Pakistan, will get another chance to show his prowess. Ben Stokes will make a comeback in whites after playing the ODI series against the Men in Blue. Adil Rashid is most likely to make the playing eleven. Moeen Ali may also find his place back in the side. The match is also crucial for Alastair Cook, who will be keen to get back his rhythm with the bat.

KL Rahul is expected to partner Murali Vijay as Shikhar Dhawan, the other opening batsman in the squad hasn’t been impressive in the last few matches. Kuldeep Yadav may also be roped in, bearing in mind his recent performances, however the same will depend on the conditions. If the atmosphere is favourable for seam bowling, Mohammed Shami may also get the nod.

The prediction is for England to win the match and take a 1-0 lead in the series. 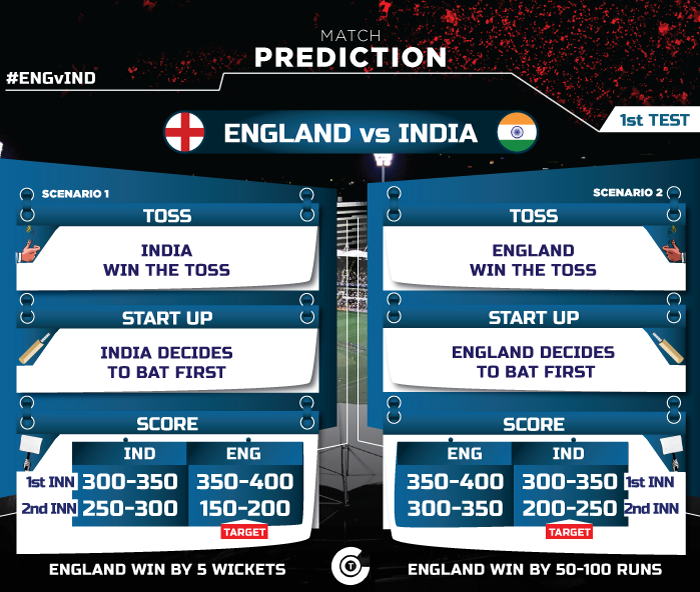