All that you need to read before picking your Fantain XI for Rajasthan vs Delhi.

High on confidence after winning against Mumbai, Rajasthan will now host Delhi at the Sawai Mansingh Stadium in what is a must win for them to stay in contention for the playoffs. Delhi, on the other hand, are just one win away from almost confirming a spot in the playoffs. Delhi’s batting and bowling were brilliant against Punjab, and captain Shreyas Iyer too has been in a great form which has boosted the side. Here is all you need to know for both the teams before picking your Fantain Fantasy XI.

There is no update yet on the availability of Chris Morris. Besides that, Delhi are unlikely to make any other changes given this XI has been delivering in all the games.

Ajinkya Rahane was sacked as the captain midway and Steve Smith took over from the previous game, a decision which paid well as Rajasthan triumphed over a dangerous Mumbai side.

Shreyas Iyer – Shreyas Iyer unexpectedly was handed over the captaincy last season, when Gautam Gambhir announced that he wouldn’t like to play the rest of the season due to poor form. Although Delhi’s fortunes were miserable last season, skipper Iyer has been brilliant this year, both with the bat and his captaincy. He is a must on your Fantain XI.

Kagiso Rabada – Even the best of batsmen have been unable to play the young bowler, who is very threatening with his Yorkers. We saw what he did to Andre Russell in the Super Over against Kolkata, and he can repeat the same in almost every game.

Ajinkya Rahane – Now that Rahane has been relieved of his captaincy duties, he can bat freely without any additional baggage. The batsman has not performed up to the mark this season, but with lesser duties, expect him to get you some crucial points.

Shreyas Gopal – Shreyas Gopal has shown us in patches the kind of destruction he can cause to the batsmen. If he can continue that into this game, even the best of Delhi’s batsmen could be in trouble.

Shikhar Dhawan – Dhawan did not have a good start to the Indian T20 league, but has been in fine form since his knock of 97 runs against Kolkata at the Eden Gardens. The pitch in Jaipur is batting friendly, where Dhawan can once again provide a good start to his team. 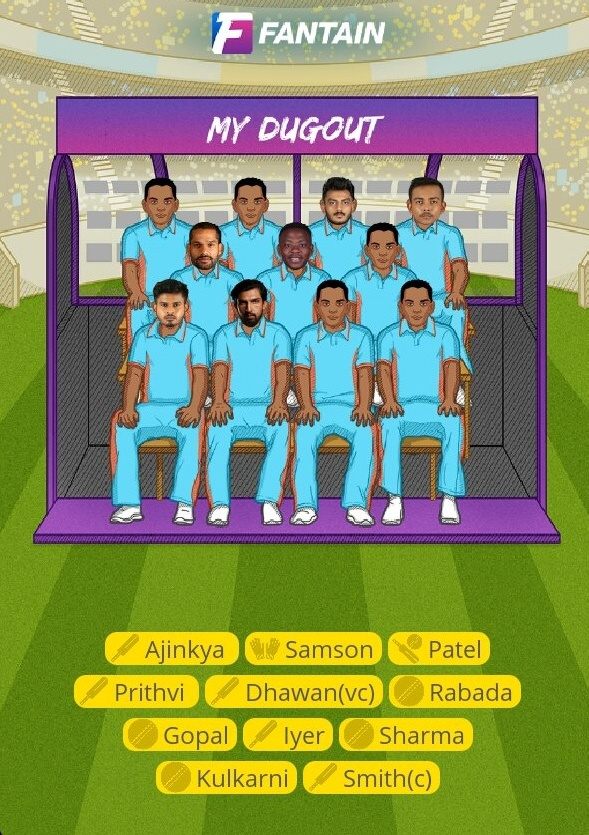