Chennai will take on Rajasthan in their first match against each other this season.

The Chennai Super Kings are all set to start their run at their new den after their home matches were shifted to Pune following some unfortunate events back in Chennai. They are hosting the Rajasthan Royals tomorrow at the Maharashtra Cricket Association Stadium in effectively their second home game of the season after the first one they played at Chepauk against the Kolkata Knight Riders.

Both the teams are looking to recover from defeats. While CSK lost against the Kings XI Punjab in Mohali a few nights back, the Rajasthan Royals were beaten comprehensively by the two-time champions Kolkata Knight Riders last night. It’s however not a desperate situation for either of the two teams at this stage as they have a couple of victories under their belt and they are in a decent position in the points table.

The MCA stadium pitch was very slow last season which was the reason why the home team Rising Pune Supergiant were able to use their slower bowlers to good effect. Jaydev Unadkat with his cutters and Washington Sundar with his off-spin had made a huge impact for RPS in IPL 10 and given the strength of this current CSK side, they will also want a similar kind of pitch.

However, even if the pitch is slow, the norm of bowling first after winning the toss won’t change because the ball will stop sticking into the surface as the dew arrives and will start skidding onto the bat nicely, allowing the batsmen to time their shots better in the second innings.

MS Dhoni hasn’t shown enough trust in Harbhajan Singh as he has been very reluctant to give him his full quota of overs in most of the games and to be fair to the skipper, Harbhajan hasn’t bowled well enough to give him the confidence to use him more often. The veteran offie has looked out of rhythm and hasn’t been able to impart proper revolutions on the ball to get the fizz off the deck

Karn Sharma is the reserve spinner in the CSK squad and he is likely to replace Harbhajan tomorrow. He had a fantastic time with the Mumbai Indians in the latter parts of the last year’s IPL and he will want to replicate that for his new franchise as well. Karn is also a bit like Imran Tahir as he bowls quite quick through the air, however he doesn’t disguise his googlies as well as Tahir. His strength lies in his accuracy more than anything else.

Although D’Arcy Short got 40 odd last night against KKR, he was all at sea when the spinners were in operation. The left-hander looked unequipped against spin to say the least as he was not nimble footed and rather than going right forward or right back, he was stuck in his crease and was looking to manage the spin just with his hands which is never the advisable way to bat on subcontinent pitches.

The Aussie opener might have to make way for Heinrich Klaasen who has relatively better skills to handle spin bowling as he is a good user of his feet. However, if Klaasen is picked, he won’t open and will bat 4 and it’s Rahul Tripathi who will open with Ajinkya Rahane.

Jofra Archer for Ben Laughlin was an expected change for Rajasthan in the last game itself, but the skipper Rahane backed Laughlin again and the move didn’t come off. Jofra’s inclusion will add some pace to the Rajasthan attack which they are lacking at the moment. With Dhawal Kulkarni, Jaydev Unadkat and Laughlin, the attack looks one-dimensional as all of them rely on variations rather than hurrying the batsmen with speed.

Rajasthan’s batting revolves around their two big superstars Ben Stokes and Jos Buttler. Although Sanju Samson has done a fantastic job for them so far at no. 3, it’s the Stokes-Buttler duo which is entrusted with the job of putting the impetus into the Rajasthan innings with some power hitting in the middle and death overs.

Chennai’s batting doesn’t depend on any particular personnel as such and there have been new heroes emerging with the bat every game. While Dwayne Bravo and Sam Billings have won them a game each on their own, MS Dhoni got a wonderful half century as well last game, also not to forget Ambati Rayudu who has been ever so consistent in the top order.

Bowling is the weaker forte of the two teams, however, if the pitch assists the spinners, Chennai has the upper hand as they have more quality in their spin department in comparison to the Rajasthan Royals who have got two fairly inexperienced spinners at their disposal.

The prediction is for the Chennai Super Kings to beat the Rajasthan Royals in this match. 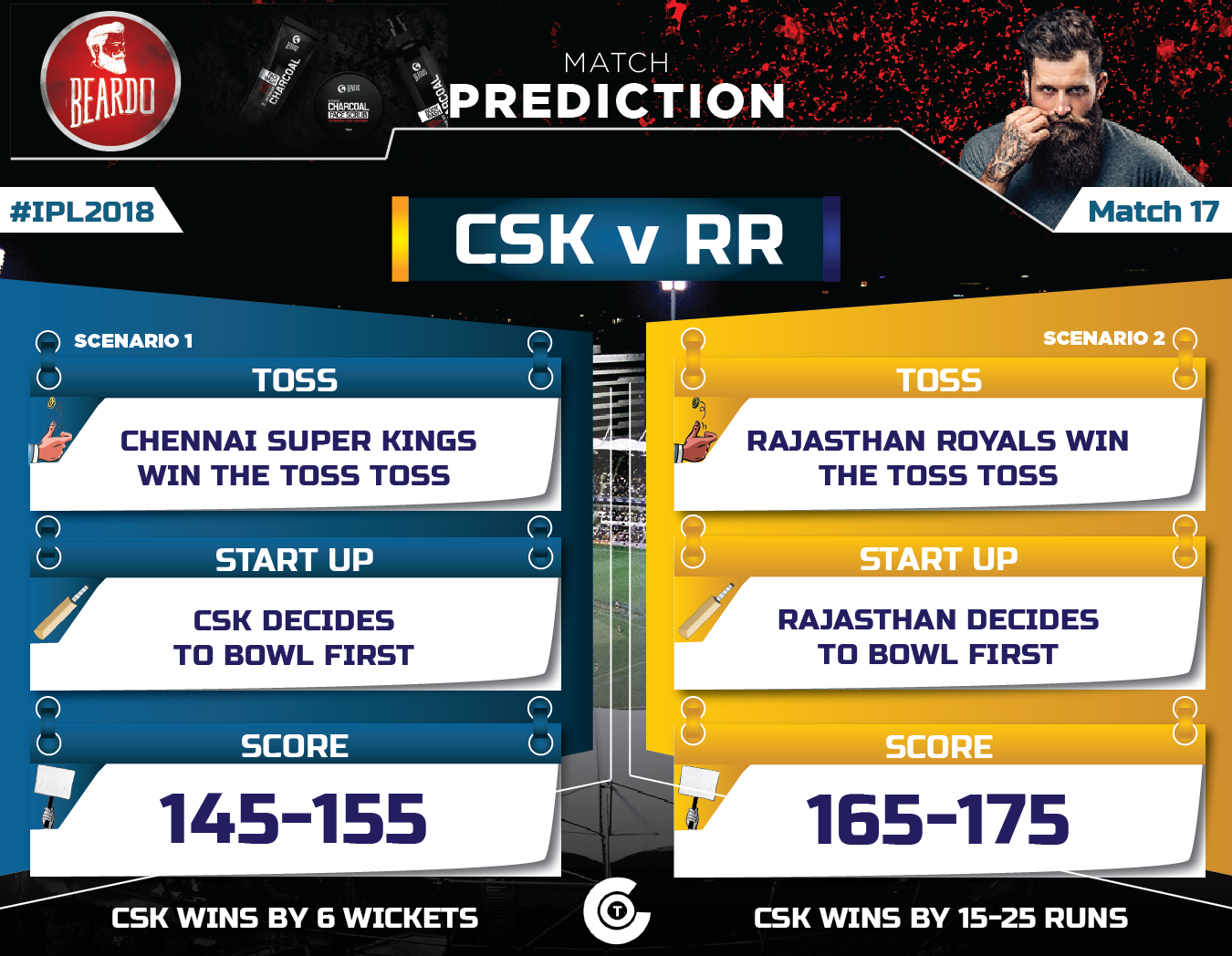