The Knight Riders are expected to begin their campaign with a win.

RCB has been one of the most interesting teams in the IPL so far. There has hardly been a season where this team hasn’t walked into the tournament as one of the favourites for top 4 and very rarely has it been able to live up to the expectations. That they are yet to win the IPL despite the tournament being 10-year old is baffling, to say the least, if you go through their squads of the previous seasons.

However, they will brush aside their past debacles as they begin a brand new season with a visit to the Eden Gardens where they will go head-to-head against the hosts and the two-time IPL champions, the Kolkata Knight Riders. This is a sort of a fresh start for KKR also under the new skipper Dinesh Karthik as they have added a lot of impressive new faces to their ranks in the auction while retaining some of their core as well.

Eden Gardens, a couple of years back, used to be a sluggish, dusty surface and that’s the reason why KKR managed to achieve so much of success there with their spinners in the 2012-2014 period. However recently the nature of the surface has drastically changed and it has transformed into a quicker on as a result of which the fast bowlers are starting to make more of an impact now in comparison to the spinners.

The playing area of the ground is small, the square boundaries, in particular, are clearable for most of the players even if they aren’t big power hitters, however, a bit of spice in the surface means this might not be a very high scoring game despite the smallish boundaries.

Dew will be in the picture though and the bowling will get a bit tougher as the evening goes on. A bowl-first decision is, therefore, a no-brainer for the captain winning the toss.

Lynn-Narine pair was a huge hit for KKR at the top of the order last season as both of them went bonkers and absolutely destroyed a few attacks. It’s unlikely that the KKR management will tinker with that combination up top. Robin Uthappa and Shubnam Gill will bat 3 and 4 respectively and will look to control the innings in the middle overs, while Nitish Rana and Dinesh Karthik will be the finishers along with the smasher Andre Russell.

Mitchell Johnson will be the leader of the KKR attack in the absence of the injured Mitchell Starc and start the proceedings with him will be the young Kamlesh Nagarkoti who was sensational in the recently finished U-19 World Cup. Piyush Chawla, Kuldeep Yadav, and Sunil Narine will form the spin trio, while Russell will be the 6th bowling option for the skipper Dinesh Karthik.

Brendon McCullum and Parthiv Patel will be the openers for RCB, while Virat Kohli will slot himself back to his favourite one down position. He and Ab de Villiers, as always, will hold the key in the middle order, while some handy contributions will be expected from Sarfaraz Khan and Pawan Negi as well who are two sparkling stroke-players and will probably be batting at no. 5 and 6 respectively. Sarfaraz, in particular, has been rated very highly by the RCB management as he was one of three players retained ahead of the auction.

Chris Woakes and Washington Sundar will be the two all-rounders in the RCB line-up, followed by the bowlers Yuzvendra Chahal, Tim Southee and Umesh Yadav. Chahal will be the trump-card and his spell in the middle overs will be vital.

RCB because of the presence of Virat Kohli and AB de Villiers looks better batting-wise. These two are a different force together with the wide range of batting skills that they bring to the table. And the arrival of McCullum has only strengthened an already beast of a batting unit.

KKR also possesses some power with Lynn up there, but he is more of a basher than anything else and so is Narine. While the Australian can change the complexion of a game on his own, the probability of him and Narine failing is far more than Kohli and de Villiers simply because of the high-risk game that they play. While the experience of Uthappa and Karthik means KKR is not a complete dud with the bat, the loopholes are certainly there.

However, in terms of the bowling resources, KKR seems to be in a better shape than RCB. While they have got the pace up front and the left arm angle of Johnson to add a different dimension to the attack, the two wrist spinners Kuldeep Yadav and Piyush Chawla further add to the wicket-taking quality. Sunil Narine’s mystery still works a fair bit and Andre Russell is surely not a bad 6th bowler to have.

The RCB attack isn’t balanced enough as it lacks the sting and the X-factor needed in the T20 format. The likes of Woakes, Southee and Umesh Yadav are not amongst the world’s bests when it comes to the shortest format of the game.

The prediction is for the Kolkata Knight Riders to beat the Royal Challengers in this match and begin their run in IPL 11 with a victory. 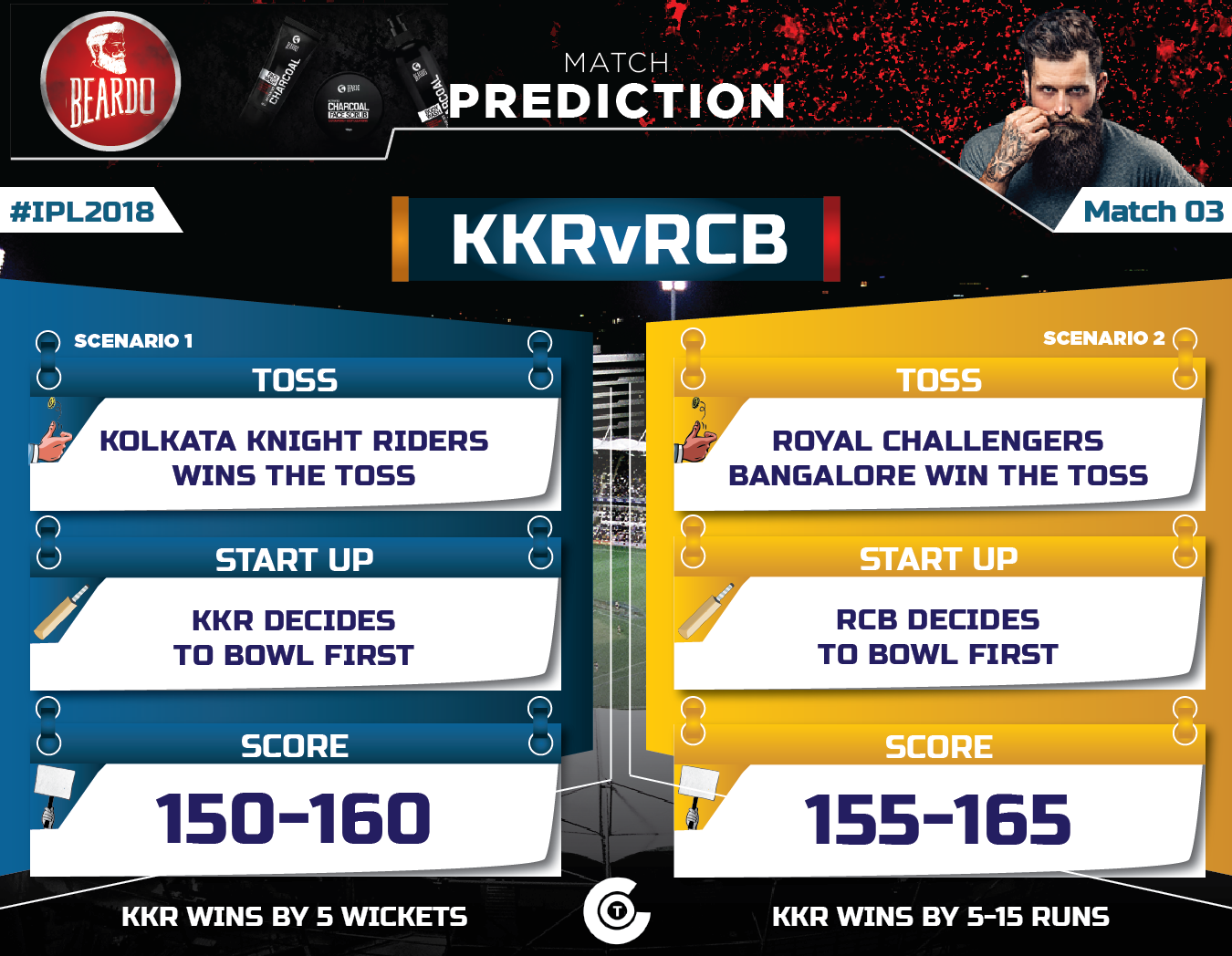