Australia‘s domestic One-Day tournament will see three matches played on Wednesday after a significant three-week break. The New South Wales will face Tasmania in the 13th match of the competition. Both the teams aren’t enjoying the tournament a great deal this season. They have won only a solitary game after playing four matches so far and will be keen to change their fortunes.

NSW are coming off a dominant victory over Western Australia while Tasmania lost their previous game to South Australia. NSW have been boasted with the presence of Australia’s Ashes heroes as all of them have been named in the squad. Steve Smith, David Warner, Nathan Lyon, Pat Cummins, Josh Hazlewood and Mitchell Starc all will play this game.

There is some rain in the forecast in the lead up to this game. But it will be partly sunny during the match time on Wednesday. The temperature will hover in the mid-20s according to AccuWeather and there will be no rain at all during the action in the middle.

Chasing has been the mantra to win the match so far at the Allan Border Field in Brisbane. The scores have varied from over 300 to less than 200 in the first innings and the team batting first should be wary of the same. The team winning the toss will have no hesitation in bowling first.

Jordan Silk has been picked to play for Prime Minister’s XI against Sri Lanka on October 24. However, he is likely to play this fixture as well.

When Steve Smith and David Warner are playing, they ought to be the top picks in your Dream11 Fantasy side. Both of them are in great form if the 50-over format is concerned. Mitchell Starc and Pat Cummins will also be crucial for the NSW side in this match.

For Tasmania, if Silk is playing, he is extremely crucial. Caleb Jewell scored a century in his previous outing in the competition. George Bailey is another special and experienced player. 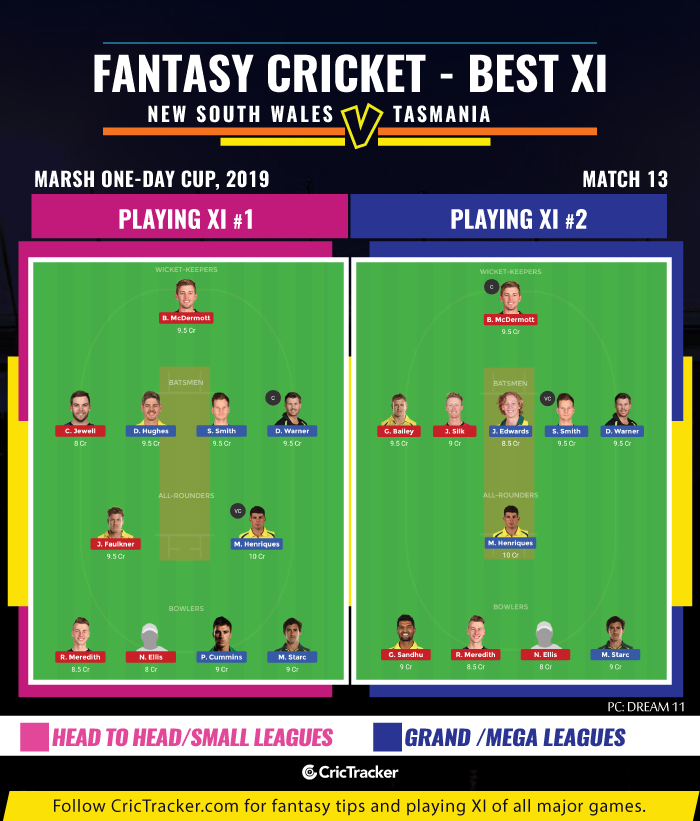 Mitchell Starc is coming off a sensational Sheffield Shield game and he is always a brilliant One-Day bowler. Don’t miss out on picking him in your Dream11 Fantasy team.

If Jordan Silk is playing, then he could be picked but with Smith and Warner a must in the team, you might have to remove the in-form Daniel Hughes then. Same is the case with George Bailey.

New South Wales are expected to win with Australia’s superstars set to feature for them.