Kamau Leverock and Tre Manders scored the fifties in both matches.

The 9th game of the 2019 Oman Men’s CWC Challenge League B will be played between Bermuda and Kenya at the Al Amerat Cricket Ground Oman Cricket (Ministry Turf 2).

Bermuda and Kenya made similar starts to the CWC Challenge as both sides lost their first two matches. They will be now facing off in Sunday’s fixture hoping to register their first win. There is a good chance of both the teams opening their points tally with this match as the weather is expected to be a spoilsport. Both Kenya and Bermuda had witnessed some brilliant individual efforts but in vain. The management will be hoping those individual performers come together on Sunday and deliver in the team’s maiden win.

It will be a miracle to get a full match on Sunday as showers are predicted during the morning and thunderstorm in the afternoon.

All the three List A matches at the Ministry Turf 2 ground in Al Amerat have witnessed 250+ totals by the sides batting first. Two of them were chased down showing how good the pitch can be for batting. Another total around 270 could be seen on Sunday at this venue. Both the teams have enough depth in batting and can be seen chasing them down. 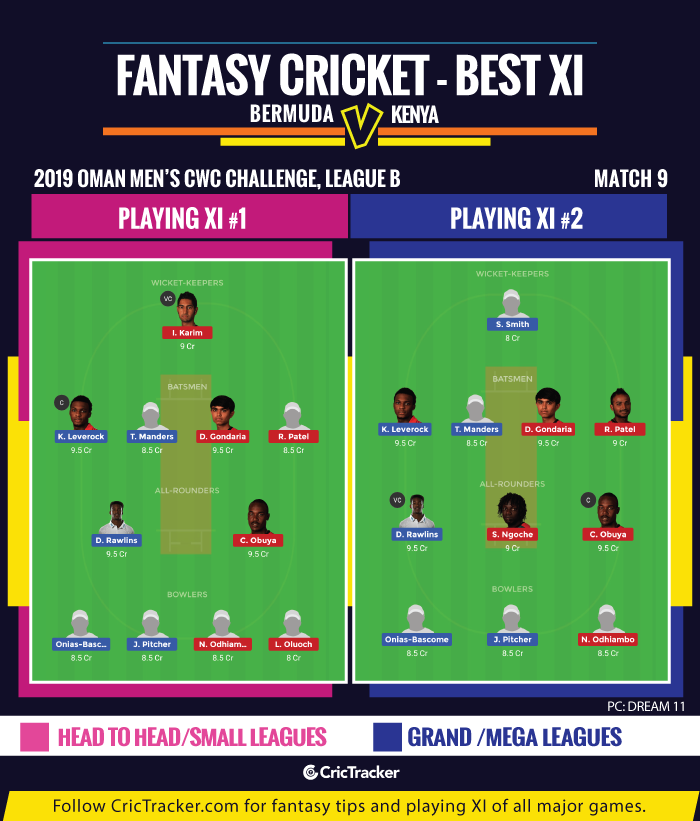 Though there are quite a few names in the all-rounders’ category, none except Collins Obuya and Delray Rawlins have been consistent. Hence, we have picked an extra batsman in both Suggested XIs given the pitch suiting big totals.

Bermuda is expected to register their first win of the tournament.