After three defeats on the trot, can the Stars finally open their account in the tournament?

The Jozi Stars, the defending champions of the Mzansi Super League (MSL) have got off to a horrendous start this season. The team, led by Temba Bavuma, slumped to back-to-back defeats at the hands of the Cape Town Blitz, the last defeat coming by 57 runs at the Newlands in Cape Town. The Stars lost their other match against the Nelson Mandela Bay Giants and are the cellar dwellers.

In their fourth match, the Stars will again lock horns with the Giants, this time at the New Wanderers Stadium in Johannesburg. On the other hand, the Giants, captained by JJ Smuts, have looked clinical thus far. After rolling over the Stars, their bowlers got the Tshwane Spartans by the scruff of their neck before rain played spoilsport. Last year, the Giants beat the Stars by 5 wickets in Johannesburg.

The opening game at the Wanderers produced 411 runs and only 8 wickets went down. Bowling in the powerplay won’t be an easy task on the batting belter. The conditions will be bright and sunny with the temperature around the 26 degrees Celsius mark. There won’t be dew and track may become slower due to the scorching heat. Hence, batting first should be the way forward.

The Stars have already tried out 15 players in three games, which depict the travails they have had. Barring Reeza Hendricks and skipper Bavuma, who have 155 and 133 runs respectively, none of the other batters have made an impact. Aaron Phangiso has an economy of 6.28, picking up a couple of wickets. Harmer has 4 wickets, but leaking runs at 9.22. Rabada hasn’t been at his best either.

The Giants bowling has impressed thus far. Chris Morris has been exceptional, picking 3 wickets at an economy of 4.66. Junior Dala also has as many wickets, though at 8.40. Imran Tahir and Nandre Burger has rates of 6 each. Jason Roy can explode any time. Matthew Breetzke and skipper Smuts can play the big shots. Farhaan Behardien and Heino Kuhn looked in great touch versus the Stars. 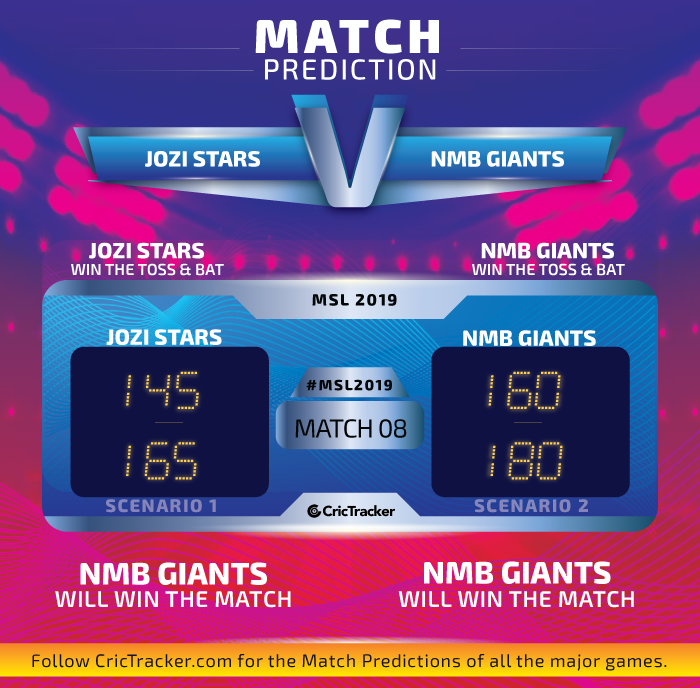