The Kiwis are on a six-match winning streak in T20Is at the Westpac Stadium.

The score-line thus far in the T20I series shows 3-0. However, New Zealand have turned no stones down in making India sweat. Luck eluded the Black Caps at the Seddon Park as India edged them out in the Super Over. Rohit Sharma’s heroics overshadowed Kane Williamson’s 95. With a couple of runs needed off the last four balls, Mohammed Shami also helped India clinch victory from the jaws of defeat.

Despite their valiant efforts, the hosts have ended up conceding the series. The Kiwis will now be playing for nothing, but pride in the final two games. The fourth encounter of the series is set to take place on Saturday at the Westpac Stadium in Wellington. At the very venue, New Zealand have won six T20Is in a row, one of which came against India last year when they won by 80 runs after posting 219..

In the 11 matches in Wellington, the 200-run mark has been breached only once. The average score in T20Is at the venue is 160 and it suggests that the upcoming match may not be a high-scoring affair. Moreover, it seems to be track where chasing a formidable score, mostly in excess of 165, can be tricky. There are no chances of rain with the temperature around the degrees Celsius mark.

Tom Bruce has replaced Colin de Grandhomme in the Black Caps’ squad for the last two matches. He is likely to come into the eleven, being a like-for-like replacement. Apart from him, the Kiwis may not change their combination. Kuggelejin played the last game and gave away only 10 runs in two overs.

Ish Sodhi has been their standout bowler with three wickets at 7.66. Concerns remain with the other bowlers. Captain Kane is in jaw-dropping form, scoring 160 runs. Munro and Guptill need to be more consistent. Ross Taylor would be desperate to make amends after faltering in the last two contests.

The visitors may want to give Navdeep Saini a chance in place of Jasprit Bumrah. The latter has looked a tad off colour and can be given a break. Shardul Thakur bowled brilliantly in the last game and he is likely to retain his spot. Ravindra Jadeja has been India’s silent performer in the series.

The spinner has four wickets at an incredible economy of 5.90. All of Bumrah, Chahal, Shami and Dube have two wickets each. KL Rahul and Shreyas Iyer have done the bulk of the scoring. Rohit’s confidence would be high as well. It’s also a matter of time before Virat Kohli comes into his own. 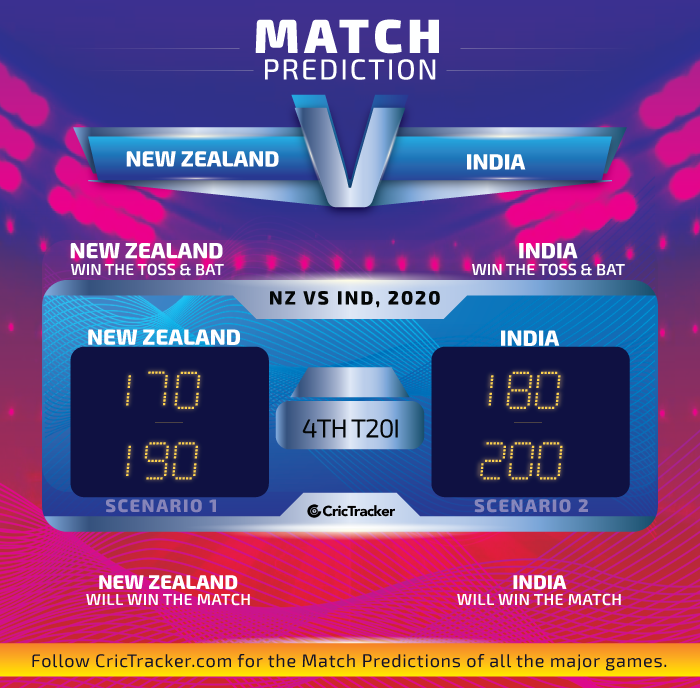