NOR vs WAS 11Wickets Prediction, Fantasy Cricket Tips, Playing 11, Pitch Report and Injury Update for Match 95 of English T20 Series 2022

NOR vs WAS 11Wickets Prediction, Fantasy Cricket Tips, Playing 11, Pitch Report and Injury Update for Match 95 of English T20 Series 2022

Northamptonshire has not won in their last two games.

Northamptonshire will take on Warwickshire at the County Ground in Northampton in the 95th match of the English T20 Series 2022. Northamptonshire are having a good season, but they have gone winless in their last two games, with one ending in a draw and the other losing by six wickets to Derbyshire. They are currently third in the standings with 14 points from 11 games. Chris Lynn and Ben Curran have served them well thus far, and their performances are critical to returning a winning run. Warwickshire, on the other hand, are having a good run in the competition and are currently fourth. Their roster includes Paul Stirling and Alex Davies, who will look to make the competition more exciting with their performances on Wednesday.

NOR vs WAS, Match 95 Pitch Report:

Since the ball comes off the bat nicely, the pitch at the County Ground usually benefits batters more than bowlers. Fans can expect a close battle between the bat and the ball because there hasn’t been a clear trend here.

NOR vs WAS, Match 95 Probable Playing XIs:

Top Picks for NOR vs WAS 11Wickets Fantasy Cricket:

Chris Lynn has collected 384 runs at an exceptional average of 84.80 in eight games. He will look to produce another stellar performance on Wednesday.

Sam Hain has been one of the important players from his side, scoring 325 runs at an impressive average of 81.25 in eight games.

Joshua Cobb has produced some exceptional performances with both the bat and ball, scoring 282 runs and taking 10 wickets at an average of 28.2 in 11 games.

Jake Lintott is a must-have bowler from his side, having taken 14 wickets at an average of 21 in 10 games.

Suggested Playing XI No.1 for NOR vs WAS 11Wickets Fantasy Cricket: 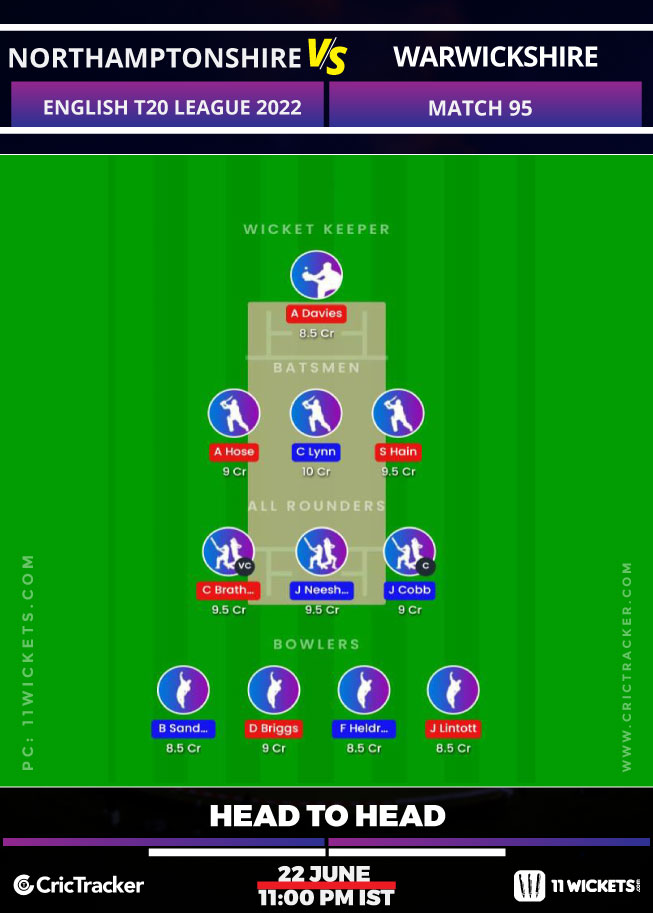 Suggested Playing XI No.2 for NOR vs WAS 11Wickets Fantasy Cricket: 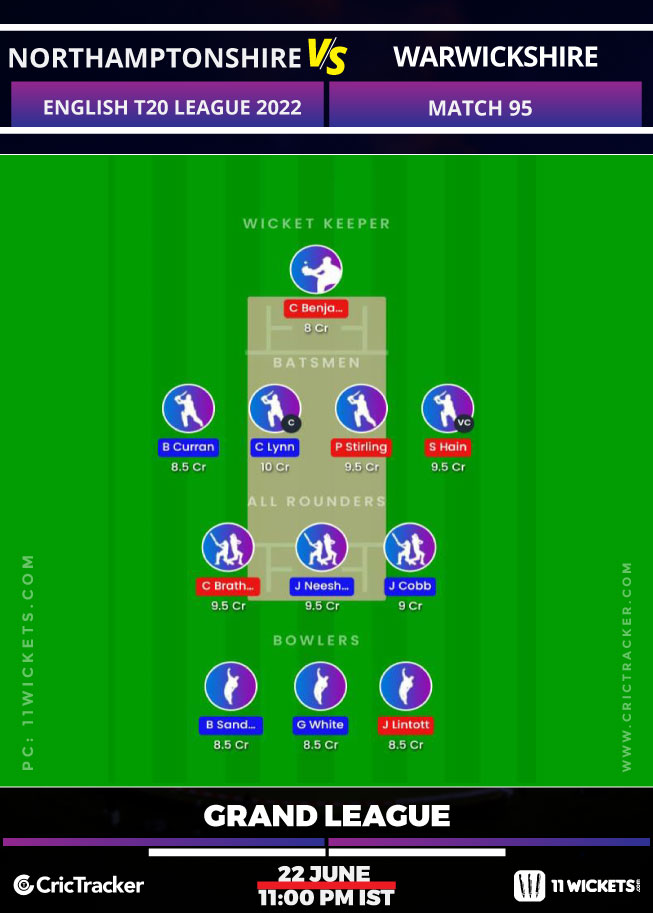