Pakistan could bench Mohammad Amir for the second ODI.

Led by skipper Aaron Finch, Australia brought out a highly clinical performance when they faced Pakistan in the first ODI at the Sharjah Cricket Association Stadium. The side won the match by a comfortable 8-wicket margin and with one over left to take a 1-0 lead in the five-match series. Just after a day’s break, the team will be back on the field to face Pakistan in the second ODI at the same venue.

The Sharjah Cricket Stadium is Pakistan’s fortress. It isn’t often that they happen to lose while playing at this venue. Thus, they will be looking to bounce back hard and level the series 1-1 before they fly to Abu Dhabi. The hosts need to address their finishing issues as they head into this match. They failed to capitalise on the start in the first ODI even though they had a chance to go past 300 runs. Also, the bowlers need to pick wickets in the middle overs.

The Sharjah track is a decent wicket to bat on. It isn’t one of those high scoring venues where teams will get past 300 easily. One could expect scores of around 260 or 270. It is predicted to be a sunny and windy day tomorrow at Sharjah. There aren’t any chances of rain.

It will be more or less the same eleven for Pakistan. They might bench Mohammad Amir for this game as he hasn’t been highly effective in recent times. He could be replaced by Usman Shinwari in the eleven. Although he didn’t have the best of debuts, Mohammad Abbas is likely to get another go. The management might bat Imad Wasim slightly higher up the order in the upcoming match.

Australia should mostly go into the match with an unchanged eleven. Shaun Marsh was impressive and he might have sealed the spot for now. Ashton Turner, unfortunately, will have to sit out. If he is to be in the playing XI, Peter Handscomb should don the gloves which is unlikely. Pat Cummins might have to sit out for this game as well.

Australia is predicted to win the second ODI as well. 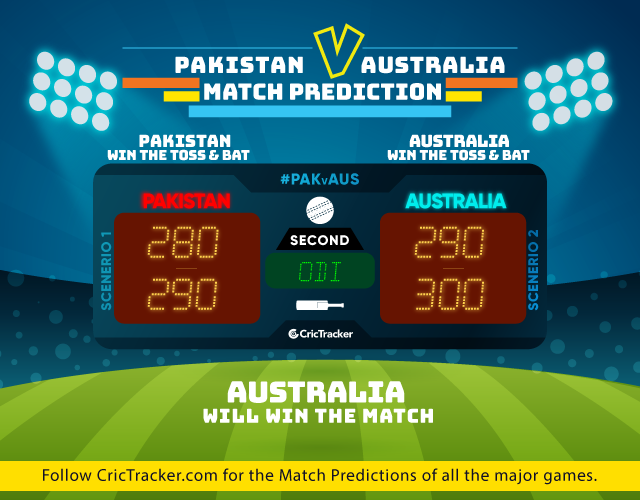