Perennial realities burst Team India's bubble of being 'the No.1 side in the world' as another chance to carve out a legacy goes begging

Perennial realities burst Team India’s bubble of being ‘the No.1 side in the world’ as another chance to carve out a legacy goes begging

In many ways, the 2020 tour of New Zealand was a disaster waiting to happen for a long time now.

So, the writing was pretty much on the wall, wasn’t it? All those talks of ’embracing’ overseas conditions; of taking the conditions out of the picture; of being the ‘best touring Indian Team’ were just- Well! ‘talks’, meaningless words which were never going to be translated into reality; not after the much-vaunted batting attack failed to fathom to difference between ‘Intent’ and ‘reckless stroke-making’; not after the openers failed to provide a decent start; not after the bowlers failed to dislodge the tail and certainly not after two of their players– Virat Kohli and Jasprit Bumrah– endured one of their worst-ever series.

Overseas tours come once in every 12-18 months and all they do, is make us fans realize the issues that plague Indian cricket at its core; they burst the bubble of invincibility that Indian cricket engulfs itself in, after bloating its record with victories at home or in countries- West Indies and Sri Lanka- who- with no disrespect to them- are not the force that they used to be.

But, this tour was supposed to be different, wasn’t it? After all, the ‘World No.1 side’-even though the scoreline wouldn’t suggest- had competed in England and South Africa before finally breaching the Aussie barrier last winter; in Mayank Agarwal, they have seemed to have found an able opener. Add the likes of Virat Kohli, Cheteshwar Pujara, Ajinkya Rahane, and their much-vaunted pace-attack into the mix and it looked like that sky is the limit for this Indian team.

Seeing the Indian pace attack and our batsmen score heaps of runs in the home season, we- the fans- were licking our lips while thinking about the upcoming New Zealand tour. Calendars were marked, alarms were set (in repeat), and we’re like – This is the moment that Team India will finally show that they are an equally good side in adverse conditions and that the win in Australia wasn’t a mere aberration.

But, then again, on the first day of the Test series, we were confronted with the bitter reality. And, over the course of the next eight days, that reality would keep playing in loop, rubbing salt to the fans already bleared eyes.

Openers- Tigers at home; fish out of water abroad

What are the realities? Well! For starters, the opening combination. This Test series once again affirmed why India will keep struggling in overseas conditions until they find a set of openers who can survive the new ball and make life somewhat easy for their famed middle-order. 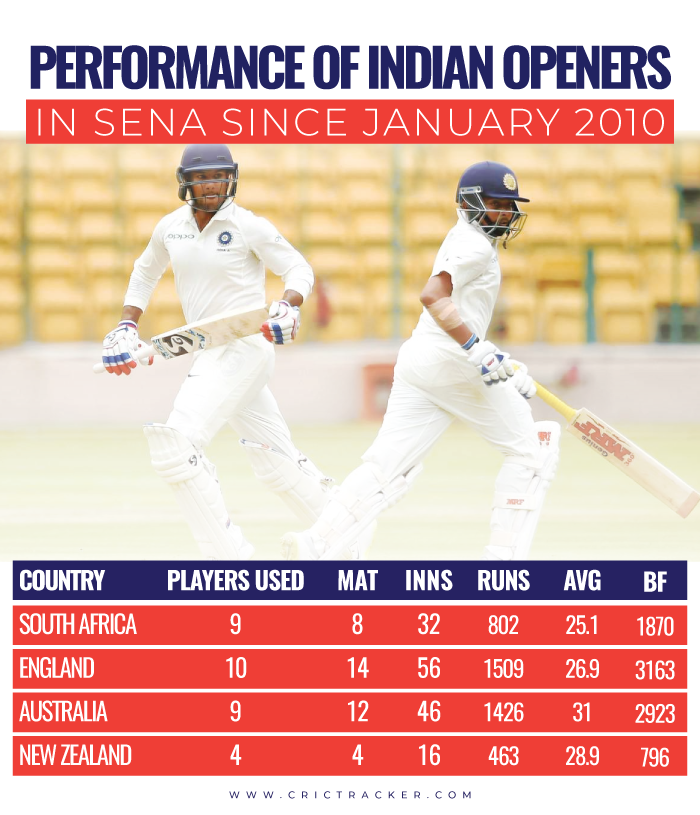 Both Mayank Agarwal and Prithvi Shaw had their moments but the duo failed as a pair as their opening stands read: 16, 27, 30 & 8. One should not forget that this was the duo’s first-ever tour of New Zealand but the same can’t be said about India’s middle-order.

In many ways, the 2020 tour of New Zealand was a disaster waiting to happen for a long time now. When your opening pair is consistently failing to provide you with good starts, the onus falls on the middle-order to rise to the occasion. Add the fact that your best player [Virat Kohli, who averaged 9.5 across four innings] is enduring a rare off-series, then the responsibility of leading the pack on two of your other senior batsmen multiplies manifold.

Which is why this series defeat is even more disappointing. To see experienced campaigners in Cheteshwar Pujara and Ajinkya Rahane succumb under pressure and give away their wicket after having done all the hard work was hugely distressing. In a way Rahane and Pujara looked like victims of a muddled mindset who- it felt- were unable to fathom:ow much intent was enough intent to please their captain.

Virat had certainly made his intentions pretty clear that he wasn’t happy with the intent of the batsmen in Wellington. And, we saw the batters oblige their captain in Christchurch but the question that needs to be asked here is whether India are overdoing this ‘intent’ thing? Do they need to strike a balance between caution and aggression? The way they batted- especially Pujara and Rahane- certainly suggested that.

The inability to dislodge the tail + debutant syndrome

The second and third reality somewhat overlap each other. Firstly: India’s inability to dismiss the lower-order. It has been a longstanding issue, one that is divided by generations but united with the lack of ability to dislodge the ‘tail’. Since the start of 2015, as many as 14 half-centuries have been scored by the batsman (8-11) against India and even the resurgence of the pace attack in the past two years, hasn’t solved the longstanding issue. 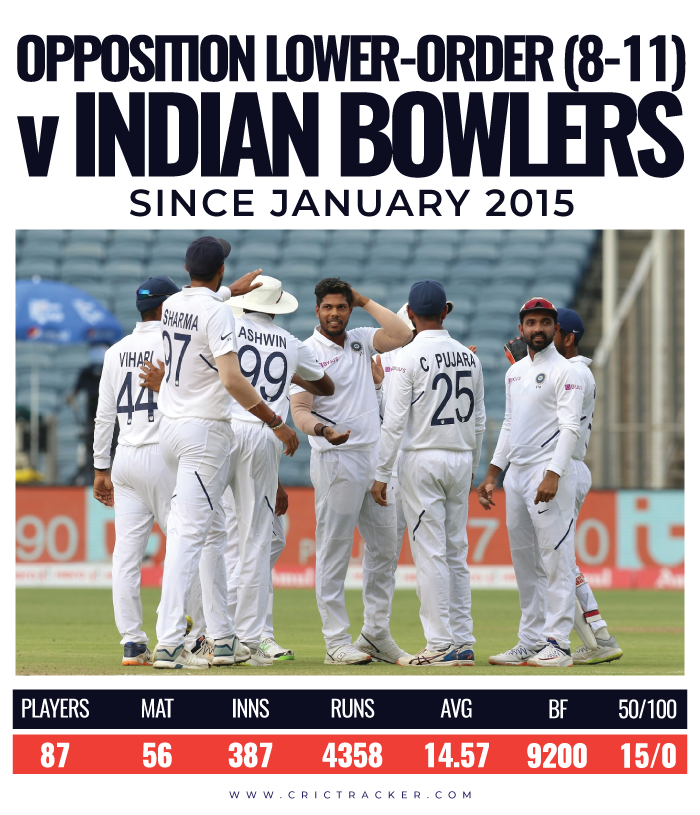 Secondly: The debutant syndrome. As was the case in England, a debutant fast bowler, who could ‘bat a bit’ turned out to be the nemesis of not only their batsmen but also for their bowlers. Back in 2018, it was a short bubbly young boy in the form of Sam Curran who proved to be India’s death-knell in England.

Two years later, much to the despair of Indian fans who have watched too many of these debutants or a lower-order batsmen wreak havoc at the expense of their team, a tall broody figure in the form of Kyle Jamieson [93 runs in 2 innings at 46.50, 9 wickets at 16.33], opened up those dastardly wounds of the past, only to vindicate that no matter which year, what opposition that India is playing, the debutant/lower-order batsman love for them will never fade away. 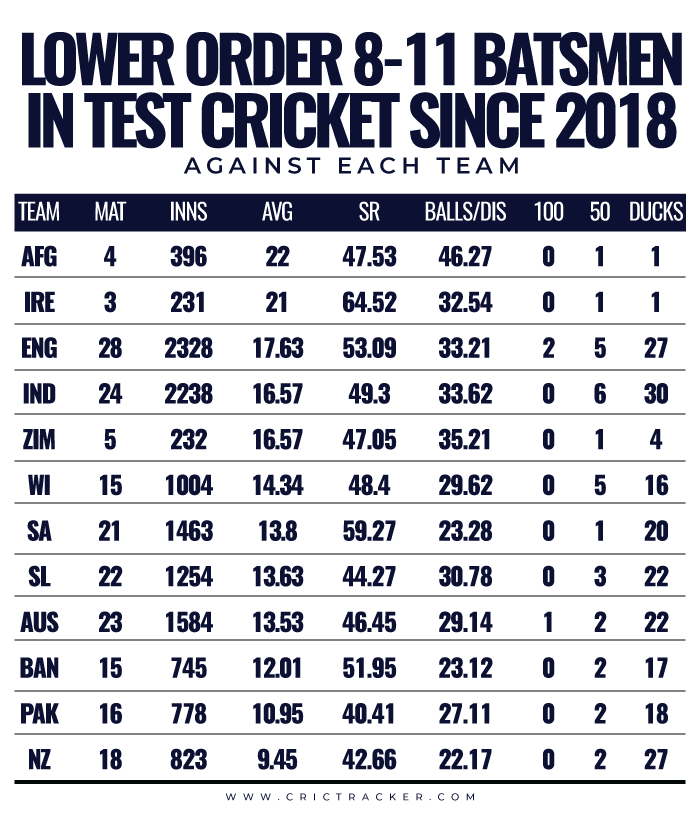 Another overseas series; another opportunity squandered

India-under Virat Kohli- have now lost Test series in South Africa [1-2], England [1-4] and now in New Zealand [0-2]. And, while they won in Australia- the first Asian side to do so- in the winter of 2018-19, that victory will always be plagued by the fact that Steven Smith and David Warner did not feature in that series.

A Test series win in New Zealand would have gone a long way in the Men in Blue asserting that they are indeed an all-condition side, as they claim to be. But while everyone expected Virat’s boys to do an encore of 2009- the last time India won a Test series in New Zealand- as days progressed, it eventually turned out to be a repeat of the nightmarish 2002 tour as familiar realities resurfaced again, staring the team, as well as, us fans right in our face- as if to say- ‘Unless you nip those long-standing issues in the bud, the difference between reality and talks will be as stark as the scoreline of the series’.

And, till then, India will be just one of those many teams’ who threatened to become world beaters but, in reality, never did.