Considering the red-hot form of Mohammad Hafeez, Riders will be eager to post their third victory of the tournament.

After the lustre of initial matches in Qatar T10 League, the extravaganza continues with another two encounters on Tuesday. The sixth match in the fast-paced league will be played between Desert Riders and Pearl Gladiators. Desert Riders have started their campaign in style as they have clinched the top spot in the points table.

Riders have won both their opening matches of the tournament. In their previous match against Flying Oryx, Mohammad Hafeez showed his calibre by smashing 45 runs off 23 balls to steer his side to the victory. Riders chased down a modest total of 95 runs with 10 balls remaining. Adnan Mirza’s cameo of 20 runs off just 8 balls was also vital against the Oryx. Considering the red-hot form of Mohammad Hafeez, Riders will be eager to post their third victory of the tournament.

Pearl Gladiators, on the other hand, had suffered a defeat in their opening match of the tournament against Flying Oryx. Gladiators were able to post only 83 runs on the board after being put to bat first. Faisal Javed, who scored 27 runs off 26 deliveries, was the pick of their batting line-up. In their second match of the Qatar T10 League, Gladiators will be looking forward to registering their first victory of the tournament.

The second match of the day will be played between Flying Oryx and Heat Stormers. Flying Oryx are sitting third in the points table after winning one out of two matches. In their opening match of the tournament, Hussain Talat smashed an impressive half-century to steer his side to the victory. Naved Malik also scalped two wickets while conceding 26 runs in his spell.

Heat Stormers, who will be playing their second match of the competition, will aim to register their first victory. In their opening match against Falcon Hunters, they were unable to defend the target of 103 runs. Dharmang Patel emerged as the top-performer for Stormers after smashing 26 runs off 14 balls.

In the first five matches of the tournament, only two encounters witnessed teams post a score more than 100 runs. However, massive totals are expected as the tournament progresses in its latter stages.

The conditions are expected to be cloudy with high chances of precipitation. The temperature will hover around 25 degrees Celcius according to AccuWeather. Humidity levels are also expected to be high.

Faisal Javed emerged as the top-performer for his side in the previous match. He scored 27 runs off 26 balls against Flying Oryx. He was assisted by the cameos of Saqlain Arshad and Adnan Ilyas. Mohammed Nadeem, who was the sole bowler to scalp a wicket in Gladiators’ previous match, is expected to lead their bowling force.

Riders’ batting force will be steered by Mohammad Hafeez, who scored a brilliant half-century in his previous match. Mohammad Tanveer and Adnan Mirza are also expected to play a vital role. Riders’ bowling attack will be steered by Sohail Tanvir and Muhammad Ikram.

The prediction is for Desert Riders to win the match. 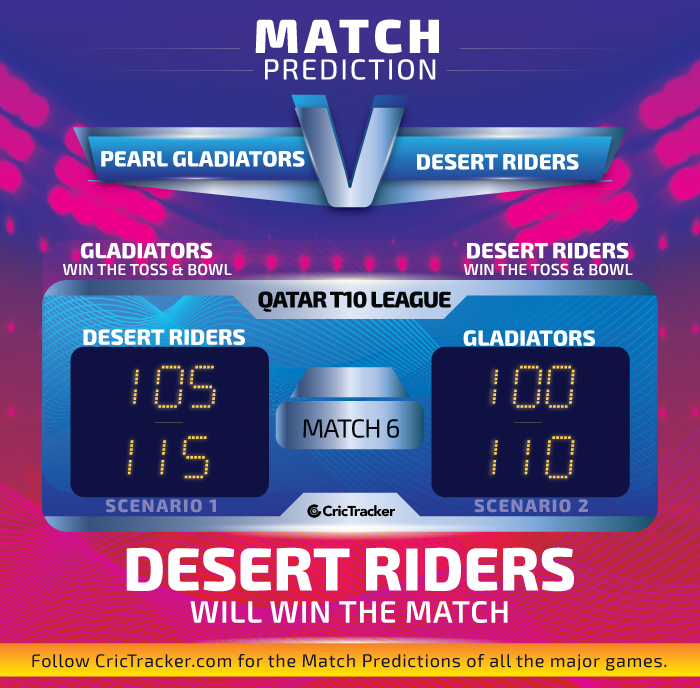 Hussain Talat stole the limelight in the first match with an impressive knock of 59 runs off 29 balls. He will be assisted by Bilawal Iqbal, who scored 21 runs off 17 balls in his previous match against Desert Riders. Naveed Malik, who scalped two wickets in a single over against Riders, is expected to put up a similar show in the encounter.

In their opening match of the Qatar T10 League, Dharmang Patel was the top-scorer for his side. Patel smashed 26 runs off 14 balls. He was assisted by Satvir Singh, who scored 23 runs off 13 deliveries.

Stormers’ skipper Manpreet Gony has the experience of playing 57 first-class matches. The 35-year-old has scalped 184 wickets in his first-class career. Mohammad Shahzad, who had a dismal endeavour in Abu Dhabi T10 League, did not start in Stormers’ first match of the tournament. The wicket-keeper batsman will be eager to bounce back on the stage for Stormers.

The prediction is for Flying Oryx to win the match. 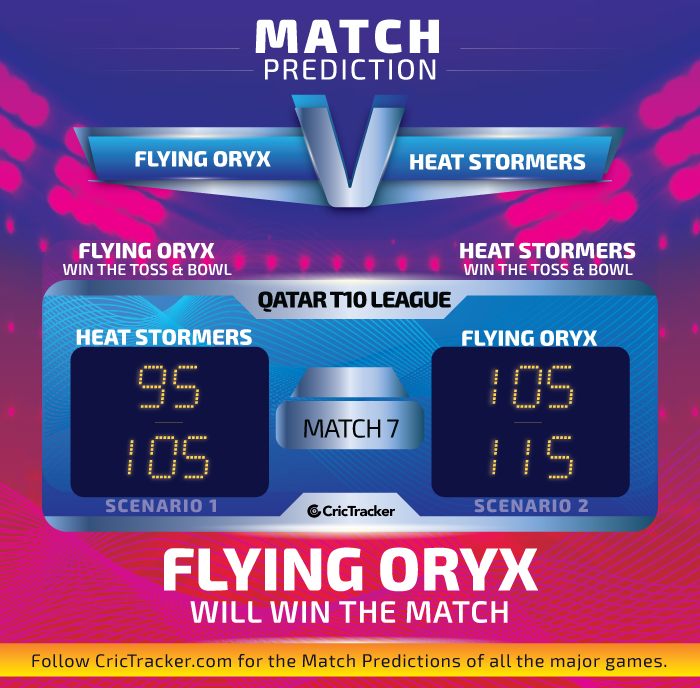