While the tournament for the Renegades is long over, they can surely halt Hurricanes journey.

Hobart Hurricanes and Melbourne Renegades will lock horns in the penultimate clash of the Big Bash League (BBL) 2020-21. The Renegades have reduced their tag to party poopers in a season where nothing has gone their way. Having lost as many as 10 fixtures out of their 13 so far, they are languishing with 13 points at the bottom of the table. While the tournament for them is long over, they can surely halt Hurricanes’ journey.

Moises Henriques led Hurricanes are currently seated at the 5th spot with 27 points after 7 wins in 13 fixtures. In this game, they are coming after defeating the second-placed Sydney Sixers by just 7 runs in a closely-fought contest. A victory for them will put them into the top-four mix, although they will keep a keen eye on the remaining contests around them, on what happens to be the last day of the league stage.

Melbourne has fared to be a scoring venue this year. In the last five completed encounters, the team batting first has crossed the 170-run mark four times, and as many targets have been defended. It would, therefore, not be wrong to expect another high-scoring thriller with the toss playing a significant role in the result of the match.

Playing combinations for REN vs HUR

Though there has been a serious scarcity of match-winners for the Renegades this year, the youngster Peter Hatzoglou has continued to punch above his weight, and he is one amongst the leading wicket-takers of the season with 16 wickets in 12 encounters hitherto.

Ben McDermott is the leading scorer for his team with 401 runs at an average of 40.10, with 3 half-centuries and a strike rate of 140. He has played a couple of blinders thus far and has taken his team to victory single-handedly. Given his hitting prowess and the high-scoring nature of the venue, expect him to blaze with the bat once again.

The prediction is for Hobart Hurricanes to win the match 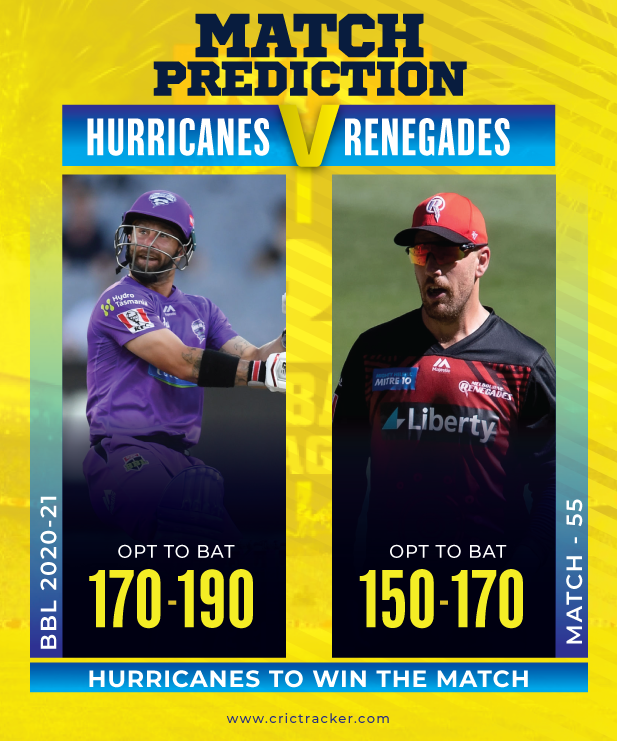