Three teams from Group B out of four have qualified for the playoffs.

The Maratha Arabians and Bengal Tigers will face-off in a knock out match. The victor will have to battle the loser of Qualifier-1 in the Eliminator right after this game. The team that doesn’t win this match is out and will have to fight for the third spot in the match that will be played on Sunday.

The journey thus far of these two teams has been quite interesting. They won three games each and advanced forward courtesy a better net run rate. The only time these two teams have met each other earlier, the Maratha Arabians, with the help of Hazratullah Zazia blew away the opposition to register a 9-wicket win. The Bengal Tigers would be seeking revenge in this encounter.

It would be the Rashid Khan vs Mujeeb Ur Rahman battle as the pitch at Sharjah assists the spinners. However, the Bengal Tigers have got a slight edge over the opposition with Sunil Narine and Mohammad Nabi in their ranks. Once the batsmen settle in, stroke making should be easy. The teams should ensure that they don’t lose wickets in bundles subjecting the other batsmen to greater pressure. The temperatures will ease down during the night and will be around 25º C.

James Faulkner might be brought back into the team for this match instead of Subramaniam Badrinath. The rest of the lineup looks good to continue. There would be high hopes on Zazai, Alex Hales and Najibullah. With the ball, Rashid Khan and DJ Bravo will hold the key. These two will have to restrict the scoring rates and also try to pick some important wickets.

The Bengal Tigers might regret resting Jason Roy and Morne Morkel in the previous encounter. The side could have ended among the top two had they not taken this decision. However, this duo is expected to come back and Riki Wessels and either of Aamer Yamin or Zaheer Khan will be sitting out. There would be high hopes on Roy who looked good in the last game that he played.

The prediction is that the Maratha Arabians will win this match. 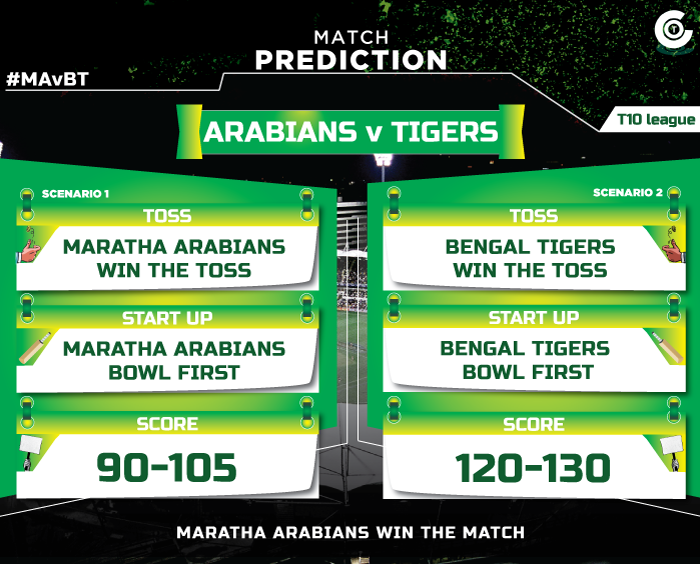