Will Shahzad fire in the must-win game for the Rajputs?

With only two matches remaining before the qualifiers, the tussle to end up in the top four is getting heated in the T10 League. Rajputs and Punjabi Legends will stacked against each other which will probably seal the fate of one of the teams. While this is the must-win game for the Rajputs who lost to Maratha Arabians by 10 wickets the other day, the Legends might well could qualify for the playoffs with a victory in this encounter.

Rajputs, led by Brendon McCullum have surprisingly gone quite after the season opener when they chased down 95 runs in just four overs. But since then, they have lost two and one game has been washed out. Languishing at the bottom of the points table with the worst net run-rate, the Rajputs will have to wonders in order to climb up the ladder now.

The Legends, on the other hand, seemed to be weakened unit when the competition started. They were the one who conceded 183 against the Northern Warriors but since have turned around their campaign dramatically beating the top teams. They are coming off a thumping victory over the defending champions Kerala Knights and would love to go to the top of the table with a win in this encounter.

The scores are coming down considerably with the pitches slowing down with every passing match. The Sindhis almost defended 91 last night against the Warriors and the scores around the same region could just prove to be enough. The conditions also won’t change much with the rain-threat no more existing in Sharjah.

It was baffling to see Munaf Patel sit on the bench in the last game having bowled brilliantly so far. Oshane Thomas turned out to be expensive and the Indian veteran could well replace him. However, the problem with the Rajputs is their batting. Mohammad Shahzad and Brendon McCullum have failed to provide the team with good starts while the middle-order has crumbled more often than not. With not much options in the reserves, they will have to hope that the current lot performs to its potential.

The Legends have no reason to change their line-up. Their top three comprises of Evin Lewis, Umar Akmal and Luke Ronchi who can rip apart any bowling attack. Philip Salt and Chris Jordan will look to up the ante in the last couple of overs. The trio of Zahir Khan, Praveen Kumar and Hasan Khan are all in great form with the ball and will be keen on dismissing the top heavy Rajputs as early as possible.

The prediction is for the Rajputs to end the glory run of Punjabi Legends in the tournament. 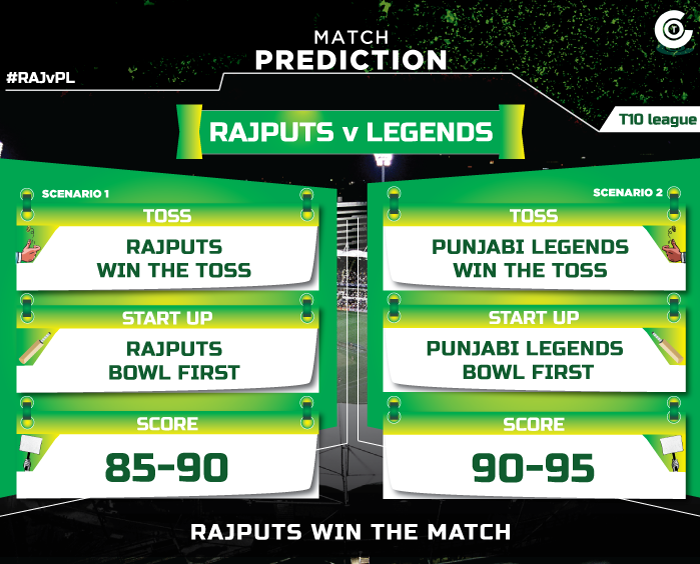 Get the latest Cricket News and updates from the T10 League, Match Predictions, Fantasy Cricket Tips and lots more on CricTracker.com.