Nicholas Pooran scored an unbeaten 56 in his first match of the season.

The 17th match of the T10 League 2019 in Super League will be played between Bangla Tigers and Northern Warriors at the Sheikh Zayed Stadium in Abu Dhabi.

The Bangla Tigers started the tournament with a 6-wicket defeat to Northern Warriors but have not lost a game since then. They defeated Karnataka Tuskers by 5 wickets and were involved in a Tie against Delhi Bulls. On Tuesday night, they outplayed the Team Abu Dhabi with a 27-run win.

The Tigers will now face the defending champions Northern Warriors. The team led by Daren Sammy will be having Nicholas Pooran and Lendl Simmons in their line-up who were away during the Group stage matches. Pooran scored an unbeaten fifty in his comeback game as they defeated the Delhi Bulls.

A storm hit Abu Dhabi earlier this week which could reach the Sheikh Zayed Stadium and cause interruption.

Another high-scoring 5:45 PM start game was witnessed on Tuesday. The target of 111 was comfortably chased down by the Northern Warriors. If the Daren Sammy-led team bat second again, the team batting first need to post a minimum of 130 runs to have a chance of gaining two points.

Andre Russell continues his domination in the fantasy leagues as he picked up five wickets and amassed 118 runs in four matches thus far. Nicholas Pooran was the leading run-getter in 2018 T10 League with 324 runs from 9 innings. He scored an unbeaten 56 on Tuesday in his first match of the season. Qais Ahmad picked up five wickets in this competition including a 3-fer against Team Abu Dhabi. Rilee Rossouw has had scores of 44*, 27, 22 and 26 in this tournament thus far. 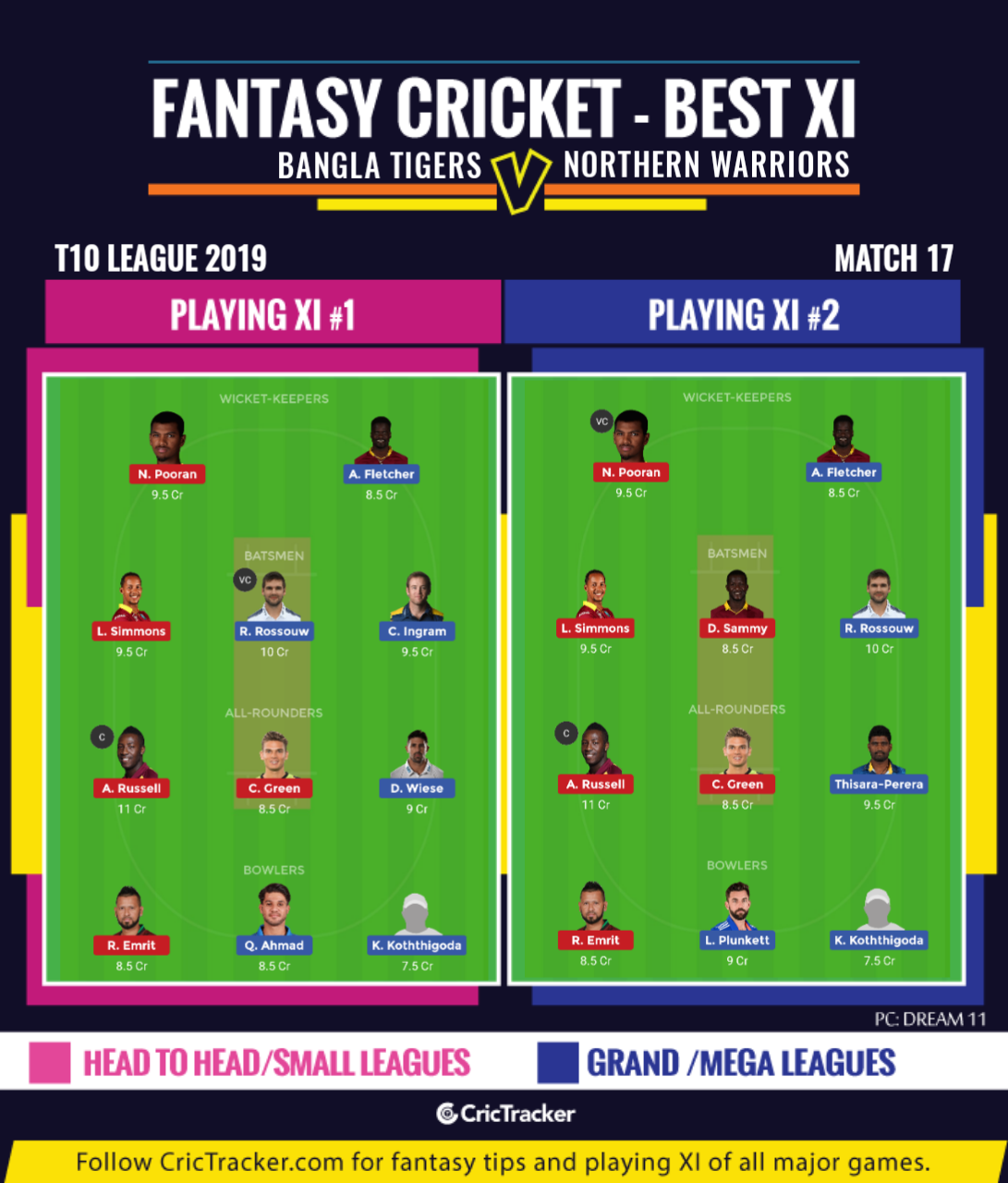 Kevin Koththigoda will be attracting a lot of fantasy teams despite taking only two wickets from four matches. It is because of his price which is only 7.5 credits. He will become crucial with the addition of players costing 9.5 and more credits.

The Northern Warriors are expected to register a comfortable win.