High-flying SoBo SuperSonics will be looking to continue their winning run when they take on NaMo Bandra Blasters.

High-flying SoBo SuperSonics will be looking to continue their winning run when they take on NaMo Bandra Blasters in the first clash of Tuesday. Both the teams have had contrasting journeys in the tournament so far and are thus placed in the opposite halves of the points table. SuperSonics are at the top of the points table with 3 wins from as many games. The Blasters, however, are still trying to get into the groove and are sixth in the table with 1 win from three games.

In their last outing, the SuperSonics got the better of Aakash Tigers MWS. Batting first, the SuperSonics had managed to score just 143 runs in the stipulated 20 overs. However, the bowlers rose to the occasions and steered SuperSonics to a thrilling win. Dhrumil Matkar starred with the ball, picking up three for 28 as Aakash Tigers finished their innings on 133 for 7.

Blasters, on the other hand, opened their account this season in their last outing. The Shreyas Iyer-led side beat Shivaji Park Lions by three runs in a thrilling tie to register their first win of the season. A fighting fifty from Sujit Nayak helped Blasters recover from a poor start and post a decent 152 for 4. In reply, the Lions finished their innings on 149 for 6.

Above 150 continues to be the above par total in the ongoing T20 Mumbai League this season. Contrary to its reputation, the Wankhede pitch has not quite delivered high-scoring games. Most of the teams have posted in the range of 150-170 and one does not see the ongoing game breaking that trend too.

As far as the weather is concerned, there is no reason to worry as there are no predictions of rain. The temperature will be hovering in the early 30s. The humidity, however, can make for an unpleasant experience as it will hover between 67-72%.

Having won all of their opening three games, SoBo Supersonics are unlikely to make any changes to their playing eleven. Similarly, NaMo Bandra Blasters are also looking set to play with the same eleven that helped them open their account in their last outing.

The prediction is for SoBo SuperSonics to continue their winning run. 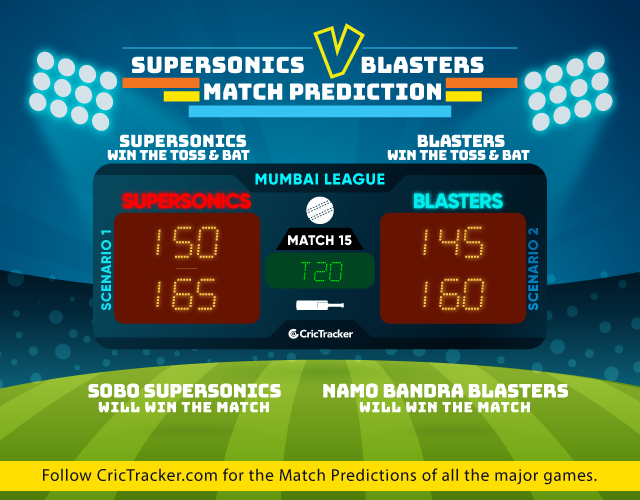