Alyssa Healy's 122 was the highest Women's ODI score by a visiting player in the Caribbean Islands.

The 2nd game of the 3-match ODI series between West Indies Women and Australia Women will be hosted by the Sir Vivian Richards Stadium in North Sound, Antigua.

The game will be live on Windies Cricket’s YouTube channel.

Australia Women kick-started their tour of the Caribbean Islands with their biggest win in the ODI format against the hosts. Record centuries from Alyssa Healy (122) and Meg Lanning (121) powered Australia to 308/4; the maiden 300+ ODI total in Women’s cricket in the West Indies. The duo added 225 runs for the 2nd wicket after losing Rachael Haynes’ wicket on the very first ball of the game.

On what looked like a good batting track, the Australian new ball bowlers Ellyse Perry and Megan Schutt ran through the West Indies Women’s batting line-up. Skipper Stafanie Taylor scored an unbeaten 70-run knock while Chinelle Henry made 14. No other player in the Windies Women’s line-up even got to double digits. This is going to be a tough one for the hosts that too in the absence of Hayley Matthews.

While the first game at the Coolidge did not interrupt the play but the 2nd ODI at the North Sound might cause a bit of trouble. There are good chances of showers and drizzle during the afternoon but unlikely to wash out the whole fixture.

This match will be the maiden Women’s ODI at the Vivian Richards Stadium in Antigua. The venue stood host for a couple of Women’s T20Is including the knockouts of the last year’s T20 World Cup. Despite those matches were played the under lights with dew around, the spinners played a major role. The recent games in any format do suggest the slowness in the pitches here.

Kycia Knight suffered a lower back injury in the first ODI and was stretched off.

The first ODI was one of the most predictable ones in terms of fantasy cricket. The highly popular top-order batters, Alyssa Healy and Meg Lanning scored hundreds. Ellyse Perry and Stafanie Taylor who usually stay captain or vice-captain in many fantasy teams put on a good show in the Coolidge ODI. 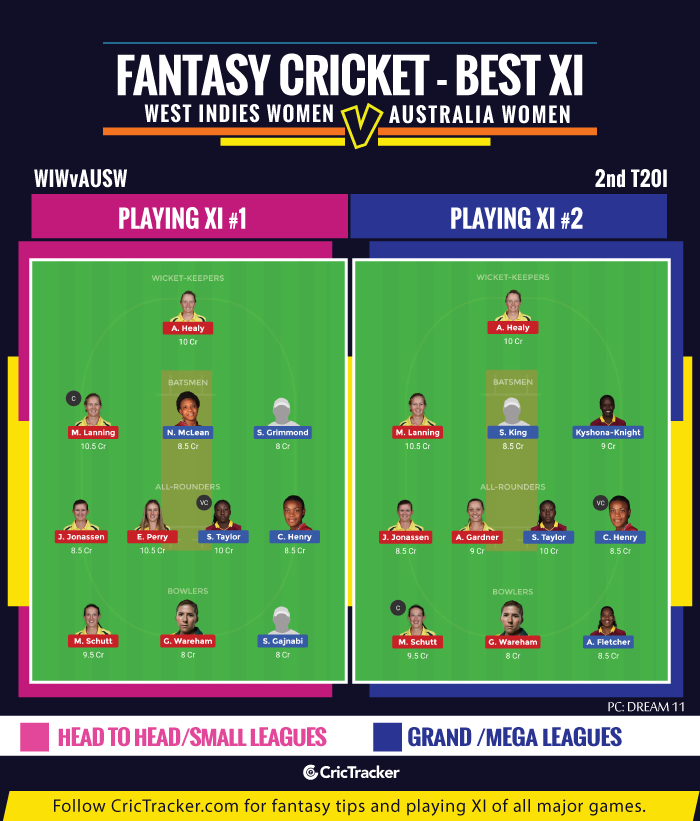 With Ellyse Perry and Megan Schutt charging in with the new ball, it will be tough for any batter to face them. The duo can extract swing in any conditions and that has been their strength. In their presence, it is tough to see anyone specialist batter earning much of fantasy points.

Australia Women are expected to extend their winning streak.