Meg Lanning and Ellyse Perry will be part of Victoria Women's squad.

The 9th match of the Women’s National Cricket League (WNCL) 2019/20 will be played between Victoria Women and Western Australia Women at the Junction Oval, Melbourne.

The Western Australia Women started the season with back to back wins against the Queensland and Tasmania teams. The presence of big names in the form of Sophie Devine and Nicole Bolton who will be key for the team in the 2nd round starting on Tuesday. They will be touring Melbourne to face Victoria Women, the mighty side of the competition. In the absence, of International stars, the Victoria team lost one and won one game. For this round, they will be boosted with the inclusion of Meg Lanning, Ellyse Perry, Sophie Molineux and Georgia Wareham.

The weather forecast for Junction Oval states a cloudy Tuesday but no signs of rain at least during the match timings.

Going by the scores of the two WNCL matches and an AUS-NZ Women’s ODI played here last year, we can conclude it to be a high-scoring venue. Australia Women recorded a 232-run chase while the Tasmania Women fell only 15 runs short of the 261-run target. In the worse possible scenario for the batters, we could see the pitch staying slightly slow.

Nicole Bolton put up brilliant performances during the first round where she aggregated 140 runs in two matches and also picked two wickets. During the 2018/19 WNCL, the Victorian skipper Meg Lanning smashed two hundreds in four matches played. She aggregated 290 runs at an average of 96.66. Molly Strano has been among wickets in the ongoing season starting from the Women’s Big Bash League. She made most of her form with the ball against India A Women in both One-Day and T20 series. 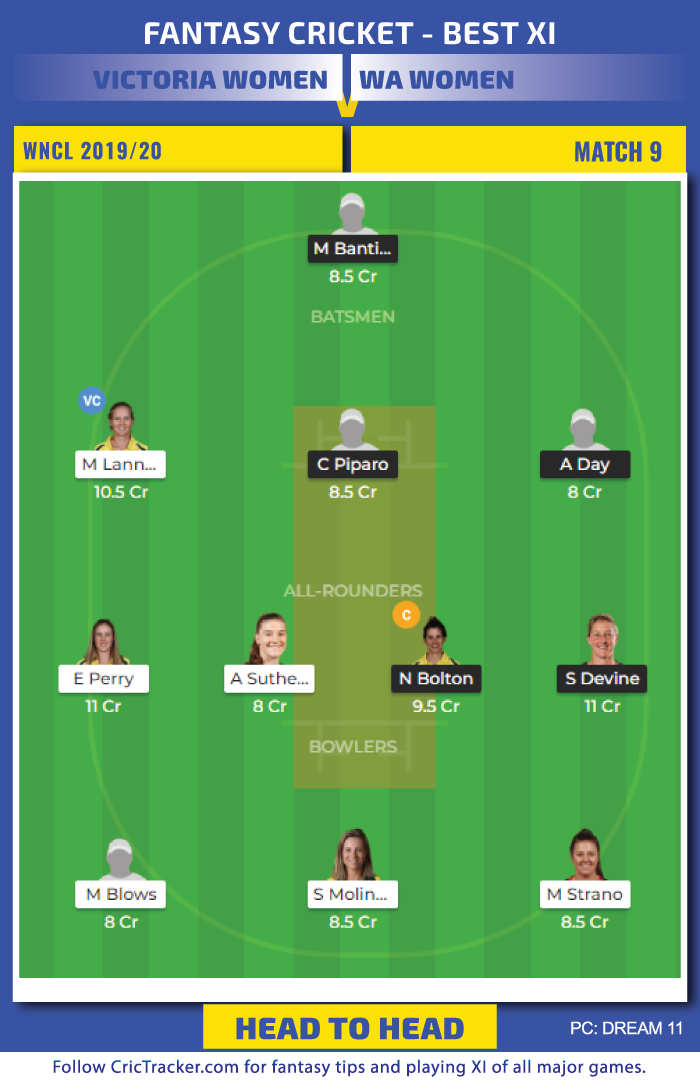 Ellyse Perry is returning off an injury and as per her quotes on CA website, she might not be bowling full quota due to the available bowling options in the Victoria squad. With four other solid options present in the all-rounders’ category, it can be a workable gamble of excluding her. Moreover, Victoria’s top-order looks heavy and Perry might be limited to finisher role.

Victoria Women are expected to start the 2nd round with a big win.