The 15th match of the Women’s Super Smash 2019-20 will be played between Central Hinds and Auckland Hearts at the Pukekura Park in New Plymouth.

The Central Hinds continues to lose against the team not named Canterbury Magicians in the Women’s Super Smash 2019-20. The Hinds have won only two of their six matches; both against the Magicians. They suffered a 49-run defeat against the Wellington Blaze on Friday, who cruised to their 5th successive win. The Hinds will now face the Auckland Hearts in 24 hours of time at the same venue. The Hearts are the other unbeaten side in the tournament. They have won all the four matches in the tournament but is yet to get to the top of the points table due to Blaze’s domination.

There is a rain forecast in the early hours of Saturday in New Plymouth. However, Pukekura Park is expected to stay away from the rain during match hours.

The Pukekura Park produced a high-scoring match on Friday afternoon on a track which was used for the Men’s game. The game as proved that the last year’s Women’s T20s were played on different tracks. The Men’s Super Smash game recorded totals of 196 and 154 and made a statement that it is unlikely to get slow down. Hence, we could be in for yet another high-scoring match if a different track is used for Saturday’s game.

Katie Perkins is in a serious form with the bat in this season with scores of 65, 69*, 28, 35*. She has scored 197 runs at an average of 98.5 and that too at 137.76 strike rate. Anna Paterson produced a blinder of an effort in the last game. She scored 61 with the bat and later followed it with a 3-wicket haul. She has claimed 8 wickets in five matches thus far. Mikaela Greig’s performances with the ball have been one of the positives for the Hinds. She took three wickets in four innings but has conceded at less than seven runs an over. Arlene Kelly has been in a similar role for the Hearts with five wickets in four games at an economy of 6.5. 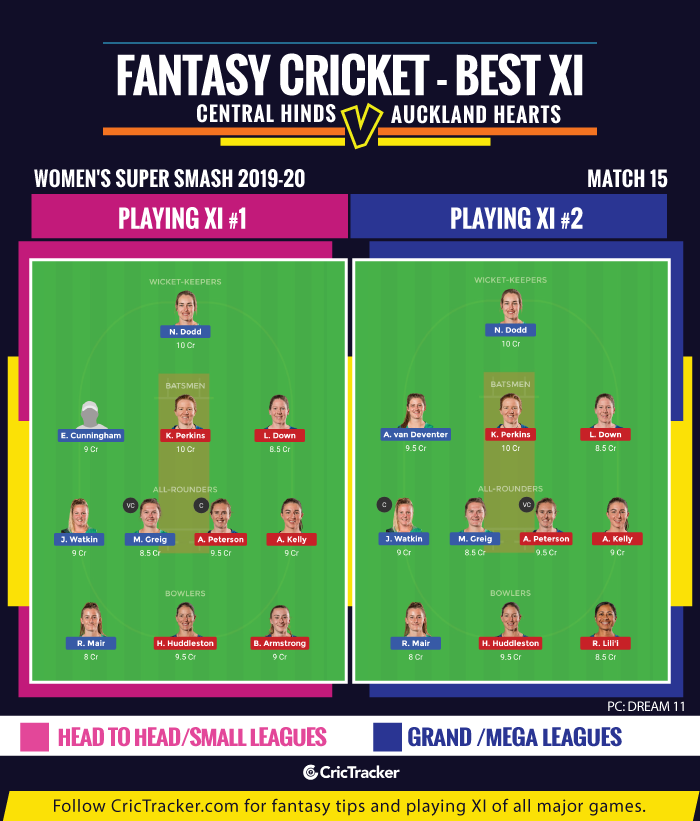 Hannah Rowe had a pretty good tournament individually in 2018/19 where she finished as the leading run-getter and wicket-taker for the Central Hinds. She took a 3-fer in the first game of this tournament and a wicket in the 2nd match. In the following three matches, she went wicketless and aggregated only two runs. On Friday, she scored 22 runs but failed to take a wicket yet again. Her recent consistency is the reason why we couldn’t fit her in our Suggested XIs. Though her cost of 9 credits can be adjusted in some way, it is quite tough to exclude one of the four performing players in the all-rounders’ category.

Auckland Hearts are expected to continue their winning streak.