A humbling defeat looked imminent. But, two individuals- battling with physical odds and their own personal demons in VVS Laxman and Rahul Dravid- had every different idea.

14 March 2001. India vs Australia. 2nd Test, Day 04. Eden Gardens, Kolkata. Steve Waugh’s all-conquering juggernaut masquerading as a Test match unit is at the doorstep of conquering what Waugh himself called ‘The Final Frontier’.  The first eight days of the Test series have gone exactly how the Aussies have planned. They had beaten India with disdain [even that is an understatement] in the first Test in Mumbai. In-fact, such as the gap between the two sides at the Wankhede, that even the most fanatic of Indian fans had given up on any hope for a possible comeback.

That gap assumed significant proportions in the first three days of the Kolkata Test. Australia- despite Harbhajan Singh’s hat-trick- recovered to post 474 in their first innings before humbling the Indian batting-unit [sans VVS Laxman] for 171. The follow-on was enforced and by the time stumps were called on the third evening, the hosts had lost four top-order wickets including that of Master Blaster Sachin Tendulkar, and were still in the first innings arrears.

A humbling defeat looked imminent. But, two individuals- battling with physical odds and their own personal demons in VVS Laxman and Rahul Dravid- had every different idea. The duo battled for the entirety of the day and by the time stumps were called, Steve Waugh had thrown the ball to almost every player in his side barring Adam Gilchrist and himself.

How Laxman and Dravid overcame their personal demons to script a renaissance for the ages? 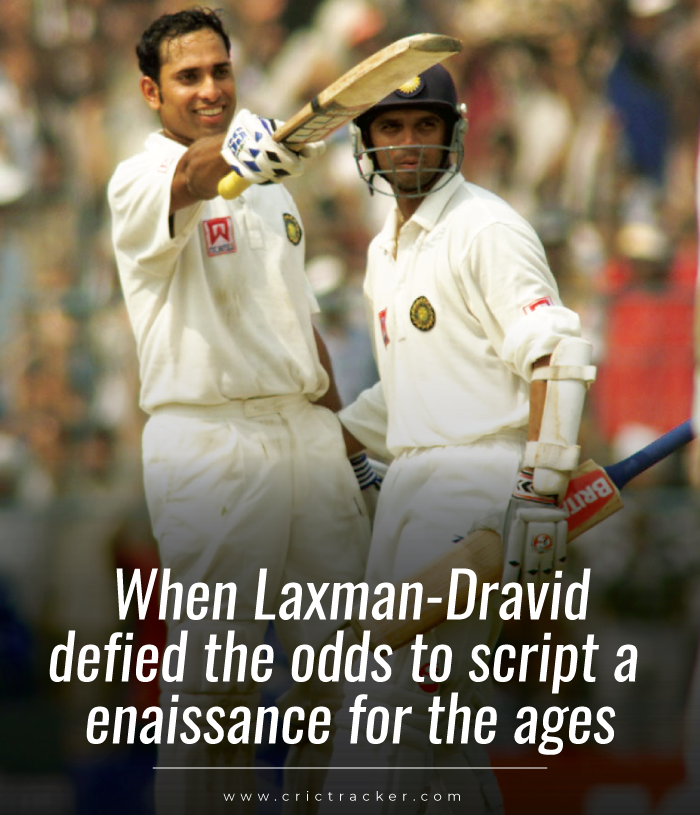 India had made a tactical shift during their second innings when they swapped the batting slots of Laxman and Dravid. Laxman was the only Indian batsmen who had looked at utmost ease against the Aussies in the first innings. And, so with Rahul Dravid not being in the best of form, the thinktank made that crucial switch;  one that not only changed the complexion of the game and the series but also the face of Indian cricket.

And, it was not as if, the Aussies were at the receiving-hand of Laxman’s sledgehammer-cum-paintbrush; they had seen their famed bowling attack pulverized to the tune of the VVS’s sumptuous strokeplay at the SCG just over a year ago. But, such was the confidence that the Australians had in themselves that they- no one, to be fair- wouldn’t have imagined what was about to ensue.

That innings in Sydney in 167 was a game-changer for Laxman. It had only saved his career but also had given him confidence that he could take on and possibly dominate any attack in the world. And, so heading into bat on day 04, Laxman’s mindset was pretty clear: focus on the ball and make the scoreboard irrelevant.

Laxman’s ability to hit the same ball on both sides of the wicket was on full display during this innings. Every time the Aussies attacked him around the off-stump, he would convert his bat into a sled-hammer and rack up boundaries for fun through brutal cuts and drives.

And, every time they tried to attack his stumps, that sledgehammer would be swiftly converted into a paintbrush, lighting up the on-side with his sumptuous, gobsmacking strokeplay. But the most enthralling site of that innings was the way he used his feet against Warne and drove the champion leg-spinner against the turn. 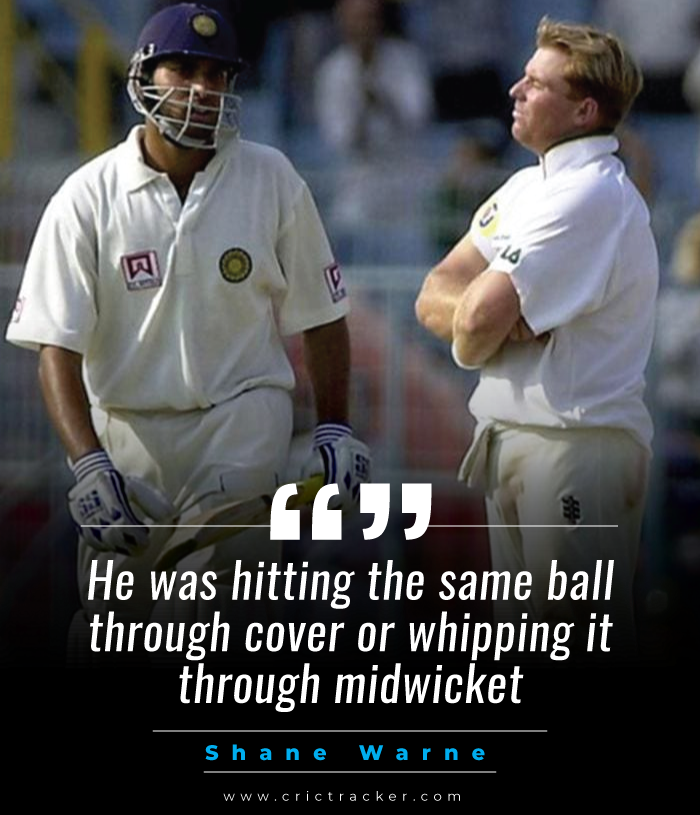 And, while Laxman was flaying the Aussie bowling attack- especially Warne- Rahul Dravid played a perfect counterpoint innings to the ‘Very Very Special’ man himself. Like Laxman, Dravid too was grappling with personal demons- especially against Australia. He had had a forgettable tour Down Under in 1999-00 and had seen himself get pushed down the order after a string of low scores in the series.

But, as we saw throughout his career, adversity brought the beast out of ‘The Wall‘. And, that beast was certainly unleashed that day, much to the agony of the Aussies. Dravid showed unrelenting grit and patience and former an ideal partner to the flamboyant Laxman on the other end. He brought up his first hundred against Australia with a boundary off Warne after he danced down the track to flick him past mid-on and mid-wicket.

Dravid’s expression and his animated celebration told you a story of what the innings meant to him; he had finally slain his personal demons and that expression on his face as he raised his bat towards the dressing room, told you how much it meant to him.

Battling extreme physical pain and the Andrew Leipus role in it

The magnanimity of Laxman and Dravid’s marathon 376-run-stand can also be gauged from the fact that both of them were battling with extreme physical discomfort at the time. In fact, Laxman wasn’t even supposed to play the Kolkata Test. 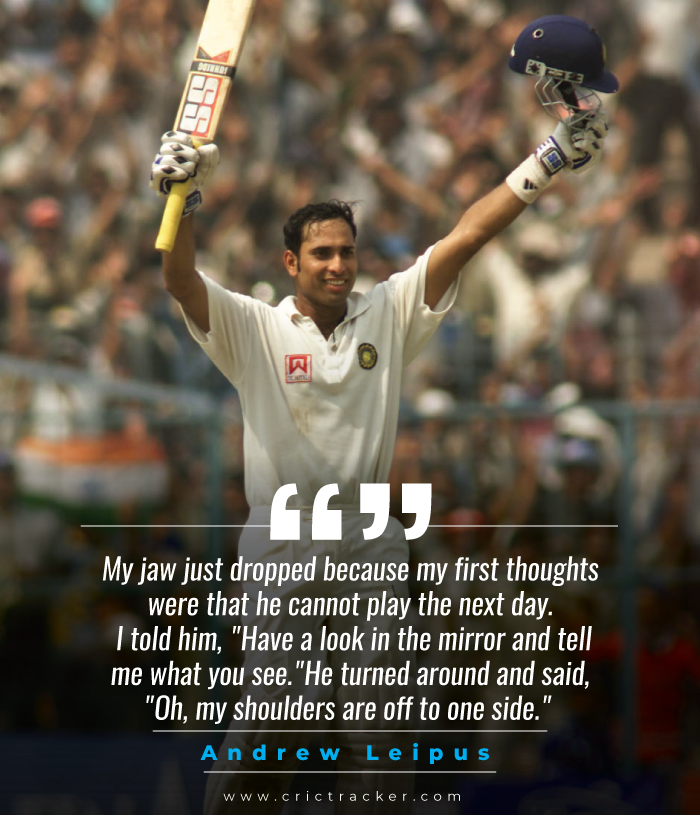 Laxman was ‘listed over’- which in physio is a term where your shoulders are not above your pelvis, they are off to one side. Leipus played a crucial role in ensuring that Laxman was fit enough to play the game. He did everything to keep VVS straight, hydrated, ensuring his cramps were at bay. Before play and in between every session, he would do manual therapies in order to counter the spasms.

Rahul Dravid too was suffering from fever during the Test match. And, the heat and humidity of Kolkata weren’t helping them either. But then, at the end of the day, it all boils down to the mental strength of an individual. And, Dravid and Laxman are the epitomai of mental toughness. Battling physical pain, mental turmoil, the magnanimity of the task at hand against the best team in the world, the duo displayed that steely resolve to the hilt on a miraculous day in Kolkata.

As the nation rejoiced, Rahul and VVS had to be put on a drip following that epic renaissance as their severely cramped up bodies were losing fluid faster than they could absorb, which- in a nutshell- just goes to tell you what these champions went through to script that unforgettable heist.

Venkatapathy Raju, in an interview with ESPNCricinfo, later recounted that on the third evening, “Laxman suddenly got up and said: “We have a good chance to win the match.” I thought to myself: “He must be crazy” Of-course, he wasn’t!