AB de Villiers – The Superhuman in the arsenal of RCB

AB de Villiers – The Superhuman in the arsenal of RCB

“Barring one superhuman, every batsman struggled on the pitch. Only AB can do what he did. It was a fabulous knock.” - Virat Kohli. 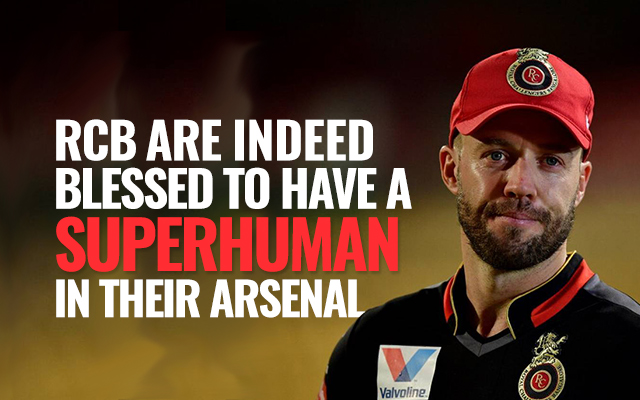 You can call him a Genius. It might still fall short. You can call him a batting maestro. It will still not be enough to capture his enigma. How does AB de Villiers do what he does? How does he make six-hitting a seemingly regular affair, as if it is the easiest thing to do?

When De Villiers walked in to bat against the Rajasthan Royals, his side needed 76 runs off the last 7 overs. And, to make matters worse, his partner in crime, Virat Kohli walked back off the very next delivery after De Villiers entered.

But then, the legendary South African took matters into his own hands, and pulled off yet another miraculous heist, in typical ‘De Villiers’ fashion.

In fact, De Villiers took his time to get his eye in before launching his savage assault. Off his first 9 balls, he scored only 8 runs. And then, just when it looked as if the game would slip away, he unleashed his assault that left the Rajasthan outfit completely rattled.

And then, came the shot of the match in the next over. Jaydev Unadkat delivered the ball outside off stump. De Villiers went deep into his crease and walloped him over cover for six. And just like that, he had cleared the boundary yet again.

And then, De Villiers went into beast mode. His side needed 35 runs off the last 2 overs, and Unadkat faced the brunt of De Villiers’ unconventional mastery with the blade. The left-arm seamer bowled a slower delivery, in a bid to outdo De Villiers with deception. But then, the right-handed batting icon was a step ahead of his opponent. He spotted the change in pace early, and the ball was launched into orbit and landed into the stands. A six off the first ball. And, the pressure was now on the bowler.

Unadkat went fuller again. De Villiers got onto his front foot and sent the ball sailing through the leg side. Another six, in the same direction. The match was slipping away from Rajasthan’s grasp.

Unadkat went short this time. And again, the ball went into the stands. Three successive sixes and the shoulders of the Rajasthan players were wilting slowly. That brought the equation down to 17 off 9. It seemed very gettable now. De Villiers had assumed charge of the chase, and was finishing it with nonchalance.

Gurkeerat Singh Mann scored another boundary in the over bowled by Unadkat.

So, when Jofra Archer got the ball in his hand to deliver the final over, Bangalore were 10 runs away from victory. Gurkeerat picked up a couple, then took a single and handed the strike over to De Villiers. The South African ran a couple, and brought the equation down to 5 runs from 3 balls. Archer steamed in and delivered the ball at almost 148 kmph. De Villiers swatted the delivery over deep midwicket for six.

“Game, set and match to Abraham Benjamin De Villiers. This is why you want to see him at the crease”, exclaimed an exuberant Ian Bishop.

A dive into the numbers

Now, let us do a brief dive into the numbers as well. In the table below, let us have a look at the top 10 highest run-scorers in IPL history. 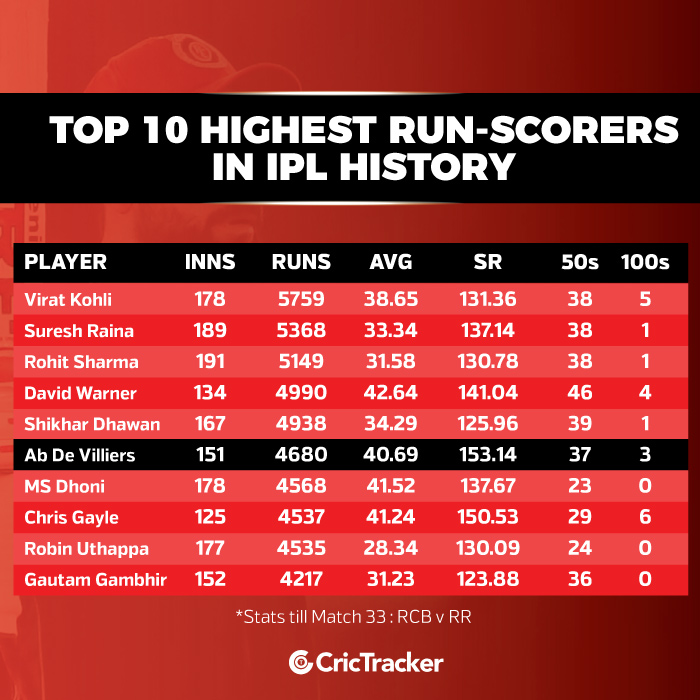 From the above table, we can see that De Villiers’ incredible numbers put him in the league of the greatest batsmen to have wielded the willow in IPL cricket. He has the best strike rate among the top 10 batsmen with the most runs in IPL cricket and has scored his runs at an astounding strike rate of 153.14. Also, he is one of the 4 batsmen to have scored over 4500 IPL runs at an average of above 40, a feat that comfortably makes him an icon of the most popular T20 league in the world.

In the table below, let us have a look at the number of 50 plus scores by the Top 10 run-scorers in IPL cricket 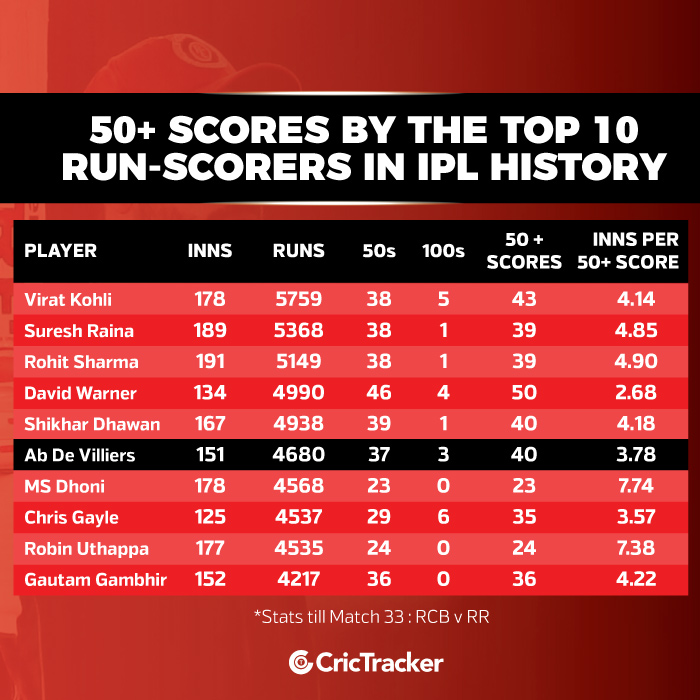 De Villiers: The Superhuman in the arsenal of RCB

In fact, after Bangalore’s win over Kolkata Knight Riders a week ago, Kohli had called De Villiers a Superhuman. This is what Kohli had to say.

“Barring one superhuman, every batsman struggled on the pitch. Only AB can do what he did. It was a fabulous knock.”

Yes. De Villiers is indeed superhuman. Only he can jump into the air defying gravity and pluck a seemingly impossible catch. Only he can pull off miraculous heists and hit sixes at will, like how he did against the Rajasthan Royals.

RCB are indeed blessed to have a superhuman in their arsenal.

Note: All stats have been taken from iplt20.com and have been updated as on 17th October 2020