Gohar Manan is a good captaincy pick for this game.

ACCB will cross swords with Bucharest Gladiators in the 7th and 8th match of ECS Romania T10 2021. Both encounters will take place at the Moara Vlasiei Cricket Ground in Bucharest on Tuesday (July 13).

While the first game will get underway at 3:30 PM IST, the second match has a start time of 5:30 PM. The games will be streamed live on FanCode.

Both teams made contrasting starts to their respective campaigns, which makes ACCB favourites for these fixtures. ACCB met Baneasa in their first two games and didn’t break a sweat in emerging as winners. They won the first clash by 44 runs, while the second game saw them walking away with a nine-wicket triumph.

On the contrary, Bucharest Gladiators made a terrible start to the season. They met United in their first two games and suffered humiliating defeats. United thrashed them by 67 runs in the first clash while they registered a 47-run victory in the following game. Hence, it would be interesting to see how the Gladiators bounce back.

Captaincy Picks for ACB vs BUG:

Centuries in a T10 game is a rarity. However, Gohar Manan achieved the feat in ACCB’s first clash against Bucharest Gladiators. The dashing opener went after the bowlers from the word go and scored runs all over the park. In total, he amassed 112 off mere 37 balls as ACCB posted a gigantic total of 166 while batting first.

All-rounder Patras Masih will be the man to watch out for from the Bucharest Gladiators camp. Despite losing wickets regularly from the other end, the batter made a fighting 15-balls 29 in his first assignment this season. Not to forget, Masih can also contribute with the ball in hand. 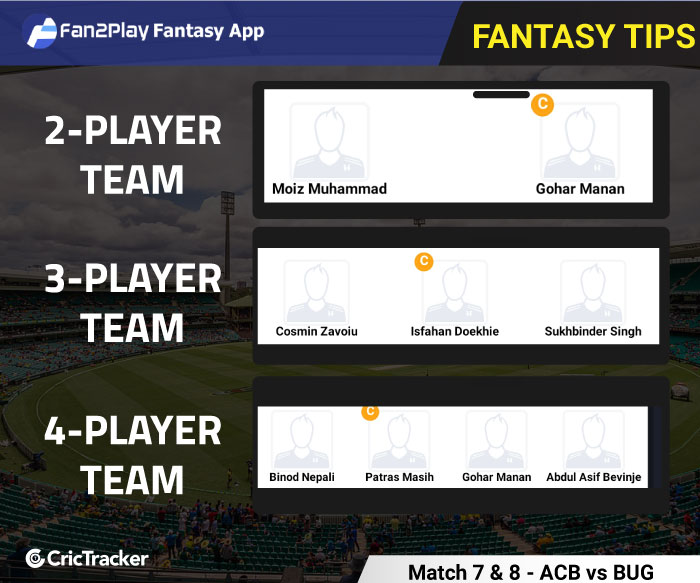