Bangladesh Emerging Team has put on some impressive performances in the ongoing Emerging Teams Asia Cup. They finished at topper of the Group B with three successive wins including a big win against the Indian team. Soumya Sarkar has been their top performer and his experience will be crucial in the remainder of the tournament. They will now face Afghanistan team in the 2nd semi-final match. The Afghanistan Emerging team finished 2nd in their group. After suffering a huge defeat against Pakistan in the first game, the Afghans bounced back with comfortable wins over Sri Lanka and Oman.

The first semi-final between Pakistan and India had showers but the 2nd SF between Bangladesh and Afghanistan is expected to finish without any interruptions.

The Shere Bangla National Stadium has been an unpredictable venue. However, the first semi-final gives a hint of a high-scoring game on Thursday. Pakistan posted a good total of 267 in their 50 overs which is close to 40 runs more than the average first innings score in the recent times. In such a case, even 280 will be chased down here.

Nazmul Hossain Shanto is Bangladesh’s top-scorer with 175 runs across three innings and also struck two fifties. Sumon Khan claimed 11 wickets in three matches with help of two 4-wicket hauls. 11, 91*, 47 – These are the scores of Abdul Malik in the group stage. Abdul Wasi picked up six wickets at an economy rate of 4.1 across three games. 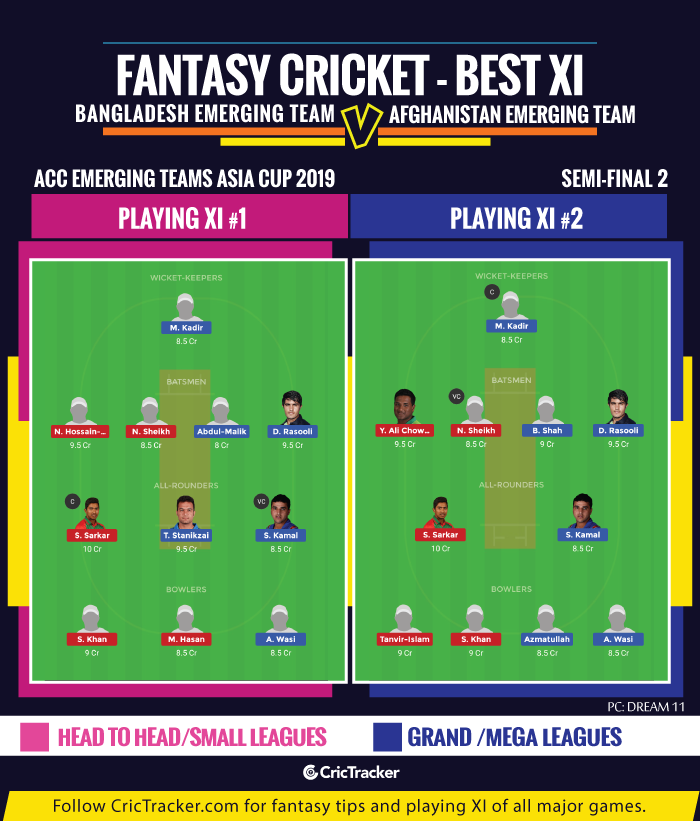 Afghanistan’s batting order is quite unpredictable as there is no settled opening pair in the tournament. It has to be seen whether they could stop that experiment as they won the previous match.

Bangladesh Emerging Team is expected to win this match.