Sharad Vesawkar has recorded scores of 89 and 44 in the two matches.

Two big wins against Hong Kong and India helped Bangladesh to qualify for the semi-final from Group B. They are the only team across both the groups to have confirmed their spot in the knockouts. The presence of Soumya Sarkar has helped Bangladesh to dominate the oppositions in this tournament. The home side were already strong in the presence of some young talents. They will now face Nepal team who have an outside chance of edging past India to qualify for the semis. Nepal’s chances majorly depend upon the result of India match.

The BKSP No.4 Ground in Savar is expected to have clear skies on Monday.

The BKSP No.4 Ground in Savar has often recorded totals around 230. However, in this tournament, the teams batting first made only 217 and 164 respectively. But if Bangladesh bat first on Monday, we might once again see a big total here. Chasing anything over 240+ is not something that the second batting teams would like to do here.

Sharad Vesawkar has recorded scores of 89 and 44 in the two matches. Soumya Sarkar amassed a total of 157 runs across two innings and also picked up two wickets bowling full quota. Nazmul Hossain Shanto scored 94 against India and was unbeaten on 22 against Hong Kong. Karan KC took four wickets including a 3-fer in the previous match. 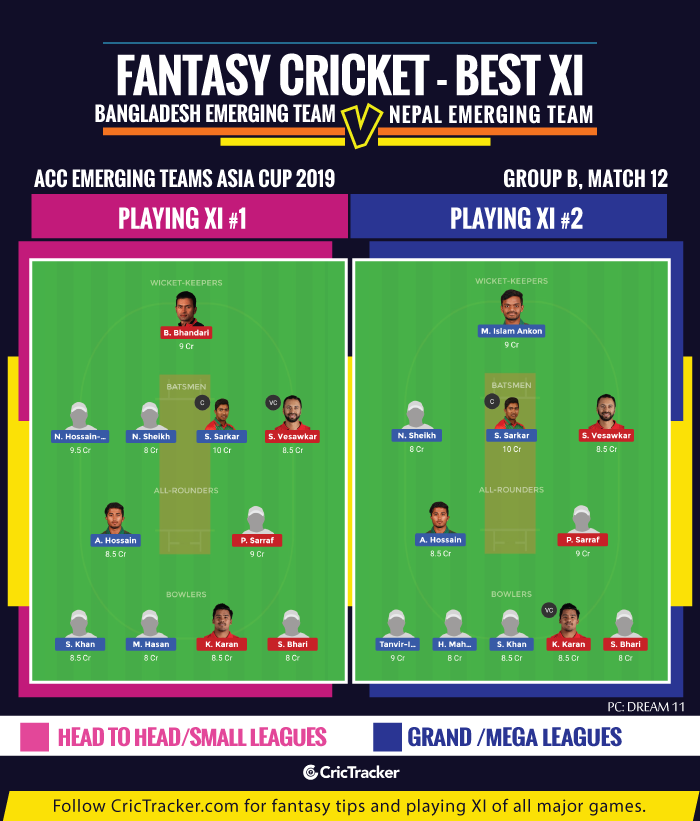 Considering Soumya Sarkar’s form in this tournament, he is likely to be the top performer in 9/10 events as he is used to playing at the top level. He will also be seen bowling full 10 overs in every game.