Amad Butt picked up two wickets in the first match against Afghanistan.

The 5th match in Group A of the ACC Emerging Teams Asia Cup 2019 will be played between Sri Lanka Emerging Team and Pakistan Emerging Team at the Sheikh Kamal International Cricket Stadium in Cox’s Bazar.

The defending champions Sri Lanka Emerging team stand on verge of elimination only after playing one game in the tournament. They were stunned by the Oman team in the tournament opener. Oman chased down the target of 269 for the loss of six wickets as opener Jatinder Singh scored an unbeaten 131. The Lankans will now face Pakistan Emerging team who started with a win. The Pakistan pace attack restricted the Afghanistan team to just 139 and helped them seal an 8-wicket win with 87 deliveries to spare.

This game between Sri Lanka and Pakistan will be played under clear skies on Saturday.

The Sheikh Kamal International stadium usually produces scores between 220 and 250. However, on Thursday, the Pakistan bowlers utilized the help from the surface to restrict Afghanistan to just 138. A better surface for batting could be seen in the game on Saturday.

Pathum Nissanka is known for his good record in age group Lankans teams and has scored 40 runs in the first match. Amad Butt now has picked 69 wickets from only 48 List A matches including a couple in the first match. The Sri Lankan skipper Charith Asalanka didn’t bowl against Oman but scored key fifty while batting at No.4. 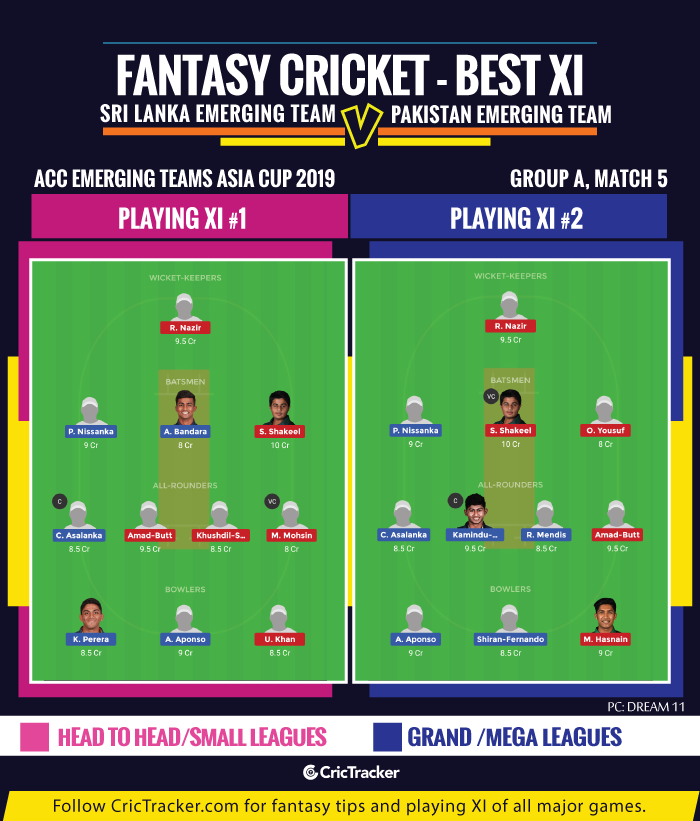 Among a lot of all-rounders for this game, the Sri Lankan skipper Charith Asalanka and Amad Butt look safe options. Kamindu Mendis is another player to look out for in the category as he bats at No.3.