Amila Aponso claimed a total of five wickets in two matches in this tournament.

The 9th match in Group A of the ACC Emerging Teams Asia Cup 2019 will be played between Sri Lanka Emerging Team and Afghanistan Emerging Team at the Sheikh Kamal International Cricket Stadium Academy Ground in Cox’s Bazar.

Sri Lanka, the defending champions of the ACC Emerging Teams Asia Cup, is on the verge of elimination before the knockouts. They suffered defeats against Oman and Pakistan respectively. The 90-run loss against Pakistan affected the NRR of the Lankans. They will now face Afghanistan team on Monday where they will need to win by a big margin. On the other hand, Afghanistan needs a win from this game to qualify for the knockouts. A narrow defeat here and Pakistan’s win over Oman will also do the favour for the Afghans.

The venue is unlikely to face any threat from the rain on Monday.

The Academy ground in Cox’s Bazar has witness chasing teams dominate the results here. One of the reasons for that has been the conditions in the first half of the match. Teams tend to lose a lot of wickets in this period and end up with a low first inning total. Earlier, Oman successfully chased down 269 at this venue.

Amila Aponso claimed a total of five wickets in two matches in this tournament. Munir Ahmad has amassed 1194 runs at an average of 62.84 in List A cricket with help of four centuries and six fifties. Pathum Nissanka recorded scores of 40 and 34 in the two matches during this tournament. Tariq Stanikzai took a 4-wicket haul playing his first game of the season against Oman. 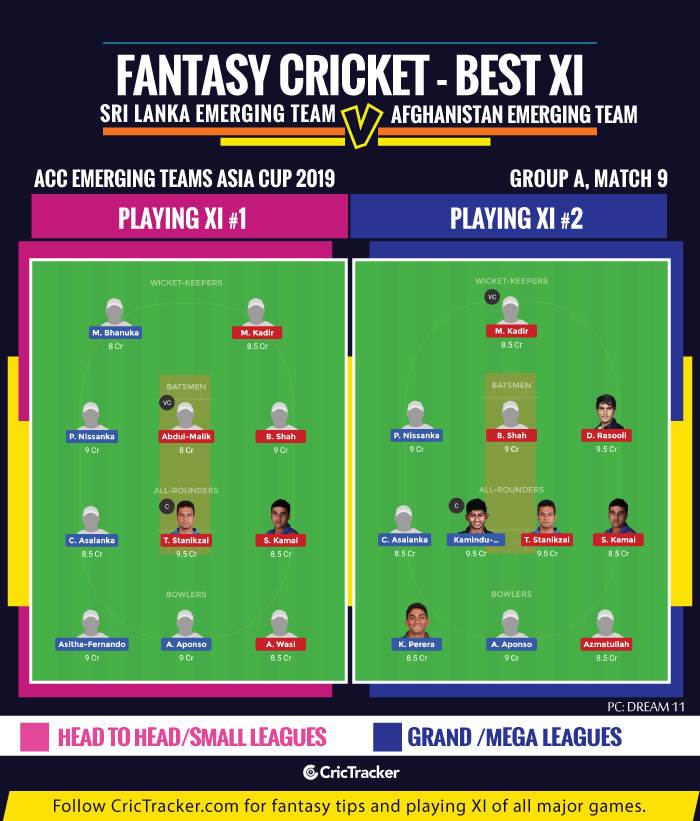 Considering the importance of the match for both the teams in the tournament’s perspective, neither of them are expected to make any major changes.