Afghanistan Under-19s have been impressive in the ongoing edition of Asia Cup as they made it to the semi-final with huge wins over Pakistan and Kuwait in the Group A. The continued their recent success over the Pakistan team as they defeated their neighbourhood team four times in as many Youth ODIs. Pakistan U19s were fresh of a 7-0 victory in the Youth ODI series against South Africa earlier this year.

However, against the defending champions India, the Afghan team went down fighting and finished 2nd in their group. Batting first, the Afghanistan Under-19s were bundled out for only 124. India were cruising in the chase at 84/2 after 24 overs. The chinaman bowler Noor Ahmad Lakanwal, who was impressive in the first two matches, conceded 18 runs from his first four overs. The 14-year-old took four wickets in 10.3 overs across first two matches.

He came back strongly in the 2nd spell by trapping the Indian skipper for a duck and set batsman Salil Arora in the same over. He cleaned up the previous match’s centurion Tilak Verma for just 1 run and got rid of Atharva Ankolekar in his first over. He recorded figures of 10-1-30-4 and is the joint leading wicket-taker of the tournament with 8 wickets. His spell reduced India to 106/7 but an unbeaten 22-run stand for the 8th wicket took India home comfortably.

The current International player of Pakistan took 4/38 in a Youth Test against England in 1996 before turning 15. Across the International matches in Under-19s, Men’s cricket and Women’s cricket, only one player was younger than the time of their 4-fer than Noor Ahmad. Sajjida Shah of Pakistan Women was only 13 years and 68 days when she took 4/22 in an ODI against the Netherlands in 2001.

Youngest players to take a 4-wicket haul in Youth Internationals: 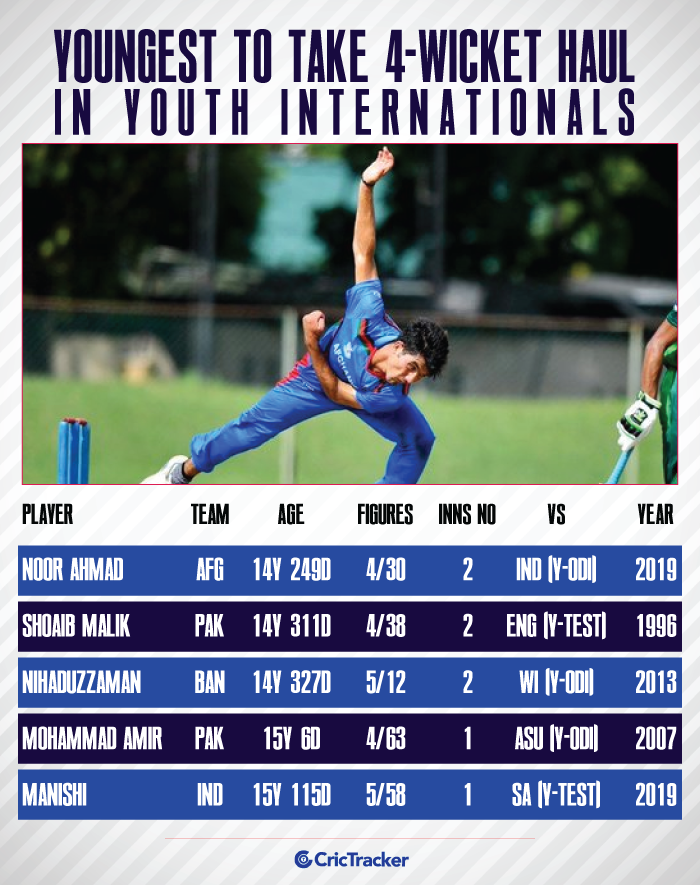