Will Ireland finally step up and deliver in the final game of the tour?

Afghanistan and Ireland will lock horns for one final time in the third T20I of the three-match series on Tuesday. The Asghar Afghan-led side has already won the series courtesy of two clinical efforts in every department of the game. While the rain arrived in the series opener when they were 11 runs ahead in the chase according to DLS method, Afghanistan defended 184 in the next game comfortably.

Ireland, on the other hand, will rue the missed opportunities on the tour. The bowlers, especially, have failed to keep a lid on the run-scoring and make timely breakthroughs in both the T20Is while the batsmen have stood up to the task. The scores of 172 and 163 are the testament to their batsmen doing a decent job and Ireland will be hopeful of going back home with a victory to their name.

The surface at the Greater Noida Sports Complex has been brilliant for batting with the scores over 170 being scored in the last two matches. Batting first could be a good option once again at the venue after winning the toss as Ireland will look to pull one back on the opposition. As far as the weather is concerned, it seems good for the match to take place with no chance of rain. The temperature is expected to hover around 26-27 Degrees Celsius according to AccuWeather.

Afghanistan, have already sealed the series, are likely to test their bench strength for the final T20I. Naveen-ul-Haq, who has made a reputation to be a good death bowler, will most probably get a chance to showcase his skills. Usman Ghani is also the part of the squad and it remains to be seen if either of Hazratullah Zazai or Rahmanullah Gurbaz is benched for him. Qais Ahmad will also be hoping to get a go in the dead rubber.

Joshua Little’s pace worked against him in the previous game and he might have to make way for Shane Getkate. Ireland management would want most of their players to get a chance with the T20 World Cup approaching. Even George Dockrell hasn’t picked up a wicket while also bowling only 3 out of 35 overs bowled by his team. Barry McCarthy seems a good and wicket-taking option to replace him for this game. 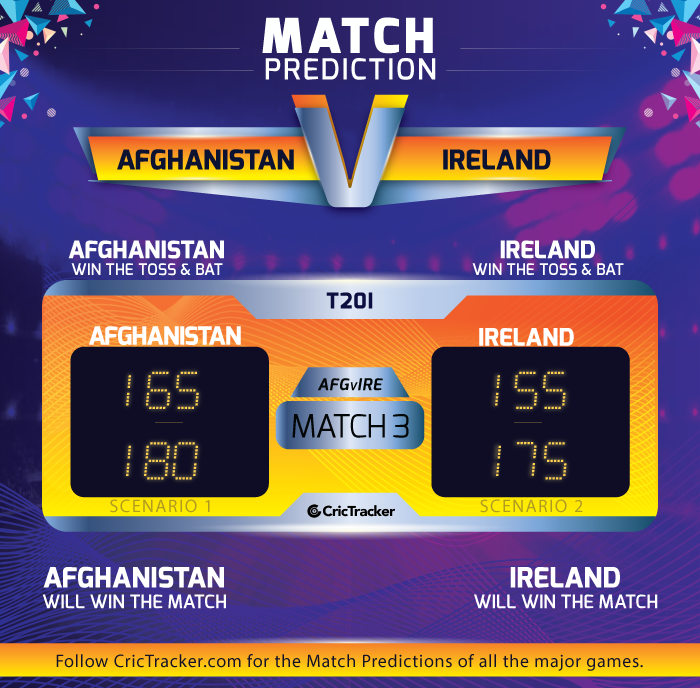