Stuart Thompson limped off the field with a suspected hamstring injury during the first T20I.

Ireland continued their T20I format struggles against Afghanistan as the Irish team have lost all the eight matches in this format against Afghans since 2017. Over the years, the Afghanistan team have developed into a T20 powerhouse thanks to their spinners who have travelled across the globe for T20 leagues. Ireland had the Afghans five down for 50 in the first T20I while defending 132/6.

However, an unbeaten 86-run stand between Mohammad Nabi and Najibullah Zadran extended Afghanistan’s T20I streak to eight matches. They are now on the course of breaking the world record of 11 consecutive T20I wins which is held by themselves. Afghanistan’s record is quite impressive in the Asian conditions as they won each of their previous 17 T20Is they played in Asia.

The 2nd game of the three-match T20I series between Afghanistan and Ireland will be hosted by the Rajiv Gandhi International Cricket Stadium in Dehradun, Uttarakhand.

The game will be live on DSport in India.

The venue in Dehradun has hosted four T20I matches of Afghanistan and has hardly witnessed big totals. The first game of the series had a covering of grass that helped the Pacers to produce a bit of movement with the new ball.

Stuart Thompson limped off the field with a suspected hamstring injury during the first T20I.

Rashid Khan has surely injected terror in the minds of the Ireland players. The leg-spinner is almost unbeatable for the Irish batsmen, especially in the T20I format. Rashid has claimed 20 wickets across eight matches at an average of 7.85 and conceded runs at an economy of 5.81 only. 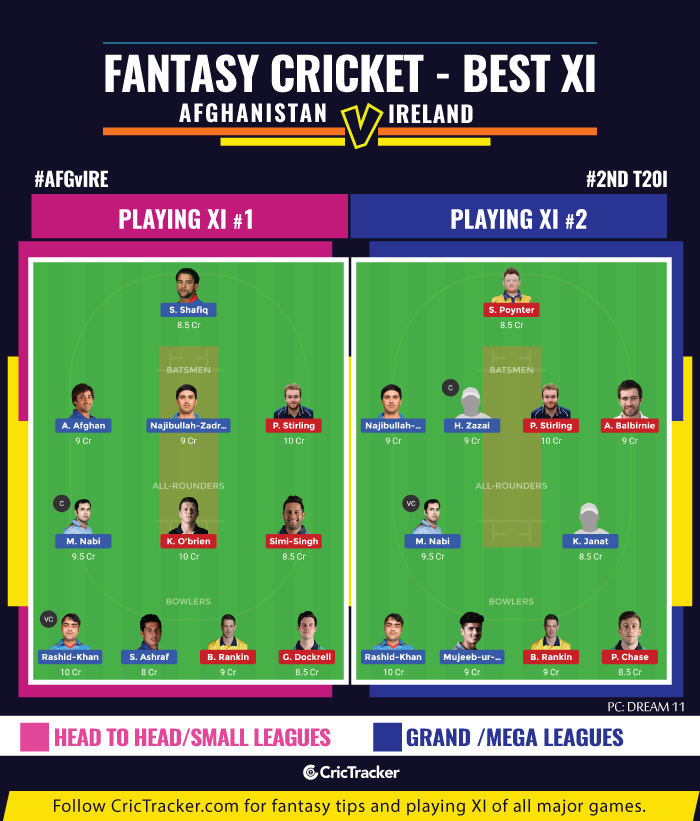 In the keepers’ category, the choice has to be made between Shafiqullah Shafiq and Stuart Poynter. The Afghanistan keeper Shafiq was slated to bat in bottom four which brings his efficiency down. However, Shafiq batted at No.3 during the T10 league and Afghanistan could consider him up the order in case of a good start.

Afghanistan is expected to continue their winning streak against Ireland in the T20I format and seal the series.