Afghanistan have now beaten Ireland eight times out of eleven in the 20-overs format, including their last six T20I encounters

Mohammad Nabi starred with both bat and ball as Afghanistan made a winning start to the series against Ireland in Dehradun. A fantastic start was provided by the Afghani bowlers, they put down the Irish batsman at 74 for 6. However, some partnership from Poynter and Dockrell certainly put Ireland into a position where they could defend.

Ireland bowler started brilliantly, they bowled out half of the Afghanistan side for mere 50 runs inside 8 overs. Ireland bowlers were dictating terms at that moment and sensing victory at that point. However, Nabi and Najib the pragmatic duo, had other ideas as rotated the strike and manoeuvred the bowlers and turned it up at the end to ensure that Afghanistan cruised to a win.

Ireland would be disappointed with their batting performances, The likes of Paul Stirling, Kevin O’Brien and Andrew Balbirnie need to put their hands up and rise to the occasion as this is a must-win match for Ireland. On the Other hand, better performance would be expected from the Afghanistan top order, as their bowling has been sensational. The likes of Rashid Khan and Mujeeb will again be the key for Afghanistan as both of them are unplayable at the moment.

There was a touch of green grass covering on the surface which helps the pitch to stick together and the ball will come on nicely on the bat. If Ireland plays Afghanistan mystery spinners well then they can put up a score of 150 odd as there was no help for the spinners in the first match.

Both teams are likely to go with the same eleven, Although Thompson got injured during the match, However, in the post-match presentation, Paul Stirling said that Thompson will be OK and ready to go.

We are still backing Hazratullah Zazai for this match as he is gifted stroke-maker, just like Mohammad Shahzad if he gets going, there is no bowler who can stop him. 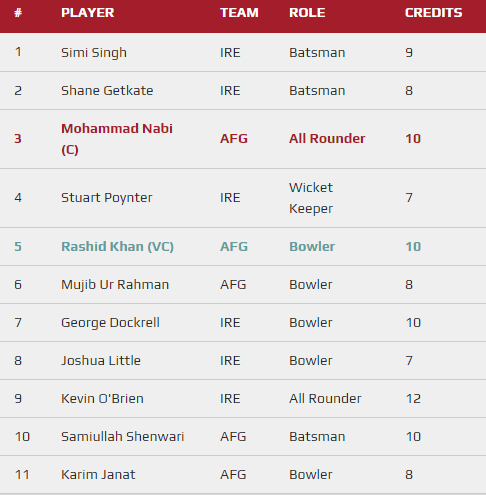