The weather prediction for the match is good and it will cool down as the evening progresses.

Afghanistan registered a massive victory in the 4th ODI against Ireland after a setback in the game before that in Dehradun. They recovered brilliantly in the last match after they were pushed onto the backfoot initially. Skipper Asghar Afghan, along with Mohammad Nabi and Rashid Khan led the fightback for the hosts.

After getting to a respectable total, Aftab Alam was on fire with the ball. He picked up four wickets in the game as the Irish team was bundled out for 114 runs. The Asian team will be high on confidence after the 109-run win and will head into the 5th ODI as the favourites. They’ll look to seal the series with a good performance.

A lot of cricket has been played at the Rajiv Gandhi International Cricket Stadium in Dehradun in the last few days. Thus, the pitches seemed to have tired a bit and the ball isn’t coming onto the bat as well. The weather prediction for the match is good and it will cool down as the evening progresses.

Afghanistan will look to experiment around with their playing eleven. Mohammad Shahzad is expected to return and will open the innings. Hazratullah Zazai, Asghar Afghan, Mohammad Nabi, and Rashid Khan seem to be the certainties in the eleven. After the good performance in the last game, Aftab Alam could retain his spot. The management will also explore the opportunity to hand over Zahir Khan his debut.

Ireland might not change its eleven from the last game. Skipper William Porterfield will open the innings along with Paul Stirling. Andrew Balbirnie will continue to bat at number three. The middle-order will have to take a lot more responsibility and score more runs. George Dockrell will be important both with the bat as well as the ball.

Afghanistan are predicted to win the match. 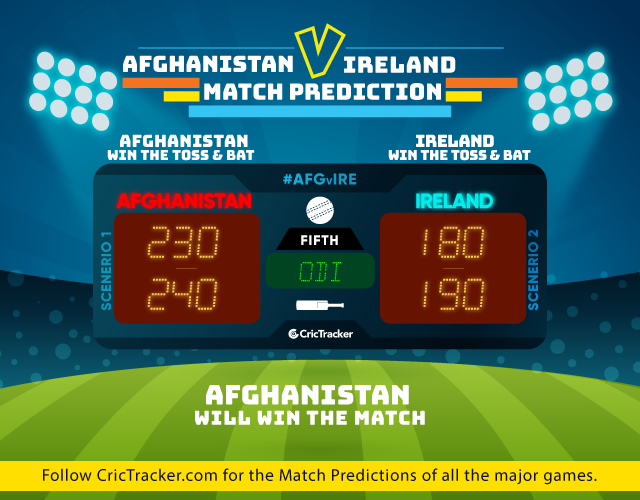