Asia Cup 2018: Match 6, BAN vs AFG, Match Prediction - Who will win the match, Bangladesh or Afghanistan?

Asia Cup 2018: Match 6, BAN vs AFG, Match Prediction – Who will win the match, Bangladesh or Afghanistan?

There's not a lot to be won in this game, but clearly, a win would mean an awful lot for both the sides.

The final group stage clash of this edition’s Asia Cup will be taking place on Thursday, with Afghanistan and Bangladesh fighting it out for the top spot in the group. But after the Asian Cricket Council (ACC) assigned B1 tag for Afghanistan and B2 for Bangladesh, the game just becomes a dead-rubber.

But no contest can be disregarded in such short-spanned tournaments as a single bad game can change the whole mindset of the team and there will be no time to recover. Considering that aspect, both these emerging sides will be keen to prove themselves in this encounter.

Both sides are coming off a comprehensive victory against Sri Lanka and have successfully knocked out the five-time Asia Cup champions. There’s not a lot to be won in this game, but clearly, a win would mean an awful lot for them.

Not much change is expected in the way the tracks have been behaving and another not so high-scoring encounter is on cards where the spinners from both sides will probably have the decisive say in the result. While Dubai has so far looked good to chase, Abu Dhabi seems to be win the toss and bat first wicket it seems.

With Tamim Iqbal being sidelined, Mominul Haque will be opening alongside Liton Das and following him in the middle order is the experienced Shakib Al Hasan, Mushfiqur Rahim, Mahmudullah and Mohammad Mithun.Skipper Mashrafe Mortaza will kick-start the innings with the new ball and Rubel Hossain will be his partner in crime.

Mustafizur Rahman’s bowling variations will be Mortaza’s go-to option when in need. Mehidy Hasan will be hogging a lot of limelight given there’s any grip offered by the track. Even the likes of Mosaddek Hossain can chip in with some crucial overs with Mahmudullah also rolling his arm over.

No changes are expected in the side that defeated Sri Lanka a few days ago. Mohammad Shahzad and Ihsanullah Janat will take guard to initiate the innings for the Afghans. Coming in at number three will be the in-form Rahmat Shah with Asghar Afghan, Hasmatullah Shahidi and Mohammad Nabi following him.

The heart and soul of this bowling attack is their spin bowling duo of Mujeeb Ur Rahman and Rashid Khan. The Tigers will have a torrid time attempting to survive through their 20 overs. Gulabadin Naib, Aftab Alam, Najibullah Zadran and Mohammad Nabi are the other bowling options for the skipper Asghar Afghan. 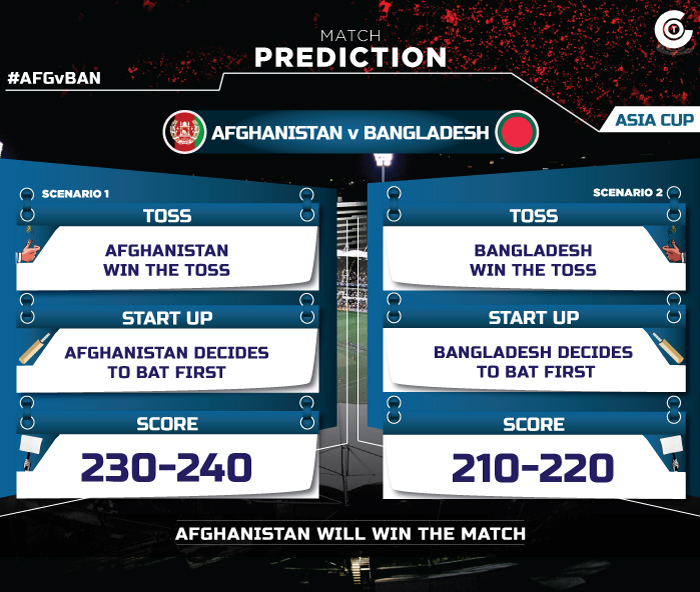