Team India have to sort out their bowling woes going into the must-win affair.

The opening ODI between Australia and India was a fairly one-sided affair with the hosts winning by as many as 66 runs. After the Aussies posted a mammoth total of 374, India always found themselves behind the 8-ball.

Though the Men in Blue got off to a rollicking start, wickets in the middle overs pegged them back. In the end, the target turned out to be an insurmountable one. The second ODI is set to be played on Sunday, November 29 at the Sydney Cricket Ground.

And it goes without saying that it’s a must-win affair for the visiting team. Australia, in the meantime, have been plagued with injury to Marcus Stoinis. Cameron Green is likely to get his maiden ODI cap. Bearing in mind India’s dominance over the years, the Aussies can’t afford to undermine them.

The pitch in Sydney was a batsman’s paradise last time around. The bowlers had a rough time and were mostly taken to the cleaners. The track is not expected to change much even in the second encounter.

Moreover, the teams, batting first have reaped benefits at the venue and hence, chasing can be avoided. The temperature will be between 28 degrees Celsius and 38 degrees Celsius.

David Warner looked at his very best in the previous match. He notched 69 runs off 76 balls with the help of six fours. The southpaw also set up a 156-run stand for the opening wicket along with Aaron Finch.

But Mohammed Shami nipped him out using the DRS. He would have been disappointed missing out on a century and would definitely want to score a century in the upcoming contest.

Virat Kohli played a bizarre knock on Friday. Though he smashed two fours and a six, that he was scratchy can’t be denied. He got a let-off when Adam Zampa dropped him at the fine-leg region.

A couple of overs later, he threw his wicket away to Josh Hazlewood while charging down the track. For a batsman of Virat’s class, the 32-year-old would be looking to play a captain’s knock in the crucial game. 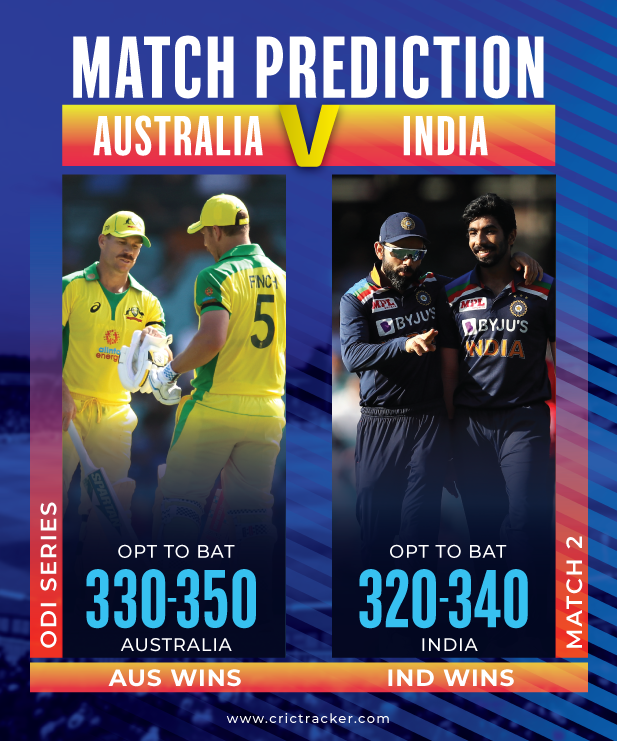