Veda Krishnamurthy has scored 188 runs during the 3-match One-Day series.

The first game of the 3-match T20 series between Australia A Women and India A Women will be played at the Bill Pippen Oval in Gold Coast.

India A Women’s tour of Australia moves into T20 format after the home team Australia A Women clinched a closely fought One-Day series. India began the tournament with a 16-run win where over 600 runs were aggregated by the two sides. The hosts bounced back with an 81-run win in another high-scoring match. The deciding 3rd One-Dayer turned out to be a low-scoring one. India’s top order departed cheaply and they stood no chance in the game. All the three One-Day matches were played at the Allan Border Field but the 3-match T20 series starting on Thursday will be hosted by Bill Pippen Oval.

Thursday afternoon is expected to have pleasant weather around the Bill Pippen Oval in Goal Coast.

The Bill Pippen Oval last hosted Women’s T20s in 2014 when Pakistan toured Australia. Four T20Is were played in that tour but a lot has changed in the Women’s T20 cricket in these five years. An average score of 116 were recorded in that series despite Australia batting first twice. If a better track is produced for Thursday’s match, we could see both teams getting 150+.

Arundhati Reddy suffered a concussion in the last One-Day match.

Shafali Verma was brilliant with the bat on the Caribbean tour. She could produce big knocks if they get to play on better batting tracks. Shafali got a big hundred in the first match on this tour. Veda Krishnamurthy gained confidence with a couple of good knocks in the West Indies T20Is and even got a hundred in the ongoing tour. Molly Strano claimed seven wickets in the three One-Days against India A Women. Tahlia McGrath is expected to continue her great run with both bat and ball from WBBL. 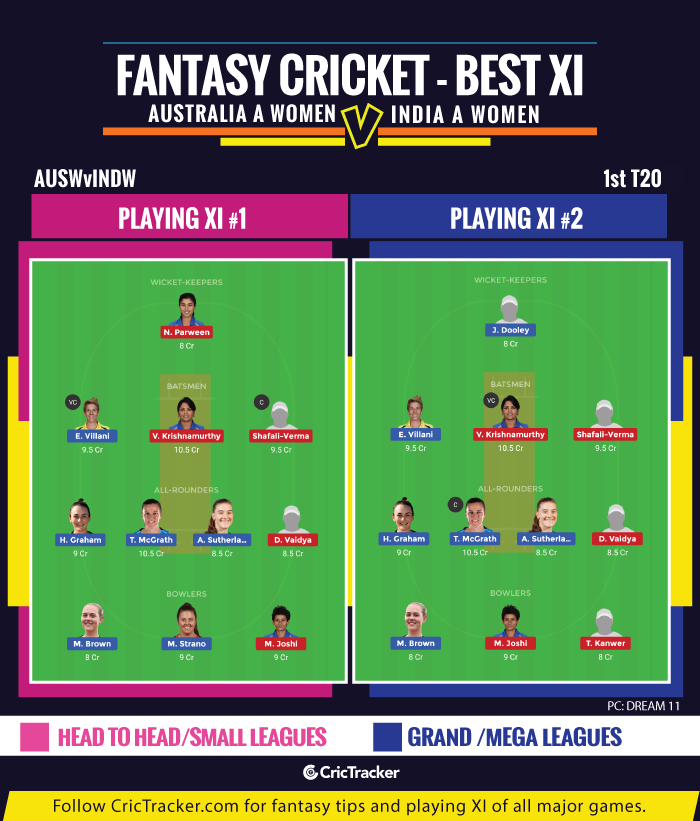 It won’t be the right choice to exclude anyone of Tahlia McGrath, Annabel Sutherland and Heather Graham in the all-rounders’ category. In fact, Devika Vaidya is also crucial due to her consistency at taking wickets. It is one of the reasons why we couldn’t pick Priya Punia any of our Suggested teams. Shafali Verma and Veda Krishnamurthy were picked ahead of Priya.

Australia A Women are expected to start the series with a comfortable win.