The 2nd game of the 3-match T20 series between Australia A Women and India A Women will be played at the Bill Pippen Oval in Gold Coast.

India A Women had a tough loss to start off the 3-match T20 series against the Australia A Women. The home team registered a huge 9-wicket win in the first game. India Women got only 112/9 even that was possible only due to Nuzhat Praween’s 44-ball 43 while batting at No.7. Despite losing Tahlia McGrath early on, Elyse Villani’s 36-ball 62 and Sammy Jo-Johnson’s 24-ball 48 scored runs at a quick pace. The duo added an unbeaten 68-run stand for the 2nd wicket in only six overs. Their contributions helped Australia A to chase down the target with 53 balls to spare.

Saturday is expected to be pleasant around the Bill Pippen Oval without any forecast of rain.

The Bill Pippen Oval produced yet another low-scoring Women’s T20 match. Similar scores were recorded here in 2014 when Pakistan toured Australia. However, Australia A Women showed how good a track it was scoring at nearly 10 runs an over. If they bat first, we could see them touching 160-run mark as the pitch seems to be two-paced in the first half.

Elyse Villani is well known for her exploits in the T20 format. In the first game of this T20 series, she scored an unbeaten 62 from only 36 balls. Shafali Verma started off in her style in the first match with 11 runs from seven balls with two fours. She has been producing big knocks recently that could be seen in the Saturday’s match. Molly Strano continued her bowling form as he picked up a couple of crucial wickets in the first T20. She had seven wickets to her name in the three One-Days against India A Women. Sammy Jo Johnson got promoted to bat at No.3 and she proved her mettle with the bat scoring an unbeaten 24-ball 48. 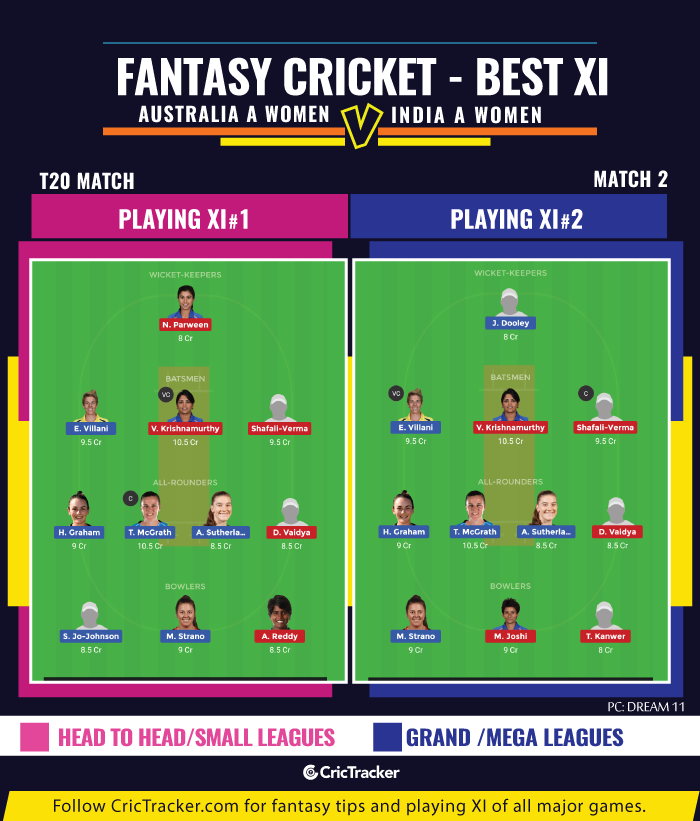 The all-round trio of Tahlia McGrath, Annabel Sutherland and Heather Graham showed their worth in the last match being among the top performers. Hence, we continue to overlook Priya Punia to make sure we pick all these three all-rounders from the Australia A Women team.

India A Women can be seen bouncing back to level the series.