Here's how the WTC points table looks like after the latest changes.

Australia have been fined 40 per cent of their match fee and penalised four ICC World Test Championship points for maintaining a slow over-rate against India in the second Test that ended in Melbourne on Tuesday. David Boon of the Emirates ICC Elite Panel of Match Referees imposed the sanction after Tim Paine’s side was ruled to be two overs short of the target after time allowances were taken into consideration.

In accordance with Article 2.22 of the ICC Code of Conduct for Players and Player Support Personnel, which relates to minimum over-rate offences, players are fined 20 per cent of their match fees for every over their side fails to bowl in the allotted time. In addition, as per Article 16.11.2 of the ICC World Test Championship playing conditions, a side is penalised two points for each over short. Consequently, four World Test Championship points have been deducted from Australia’s points total.

Paine pleaded guilty to the offence and accepted the proposed sanction, so there was no need for a formal hearing. On-field umpires Bruce Oxenford and Paul Reiffel, third umpire Paul Wilson and fourth umpire Gerard Abood leveled the charge.

India thrash Australia by 8 wickets at the MCG

India registered victory in the Boxing Day Test against Australia at the Melbourne Cricket Ground to level the series 1-1 with two more Tests to go in the series. Team India entered this Test after losing the Adelaide game after getting bundled out for just 36 runs.  Chasing a target of 70 runs in their second innings, Ajinkya Rahane’s men easily reached there by taking just 15.5 overs. The Men in Blue lost just two wickets in the process and gave Aussies 8-wicket defeat.

After bagging victory in the MCG Test, Team India earned 30 valuable points and are currently placed at the second spot with 390 points. With ICC deducting four points from Australia’s tally, their points went down from 326 to 322. New Zealand, England, and Pakistan are the other top teams in the top five of the WTC points table. India has a good chance of earning more points in the upcoming Tests of this series in order to grab a spot in the final of the competition.

Here’s how the WTC points table looks like after the latest changes: 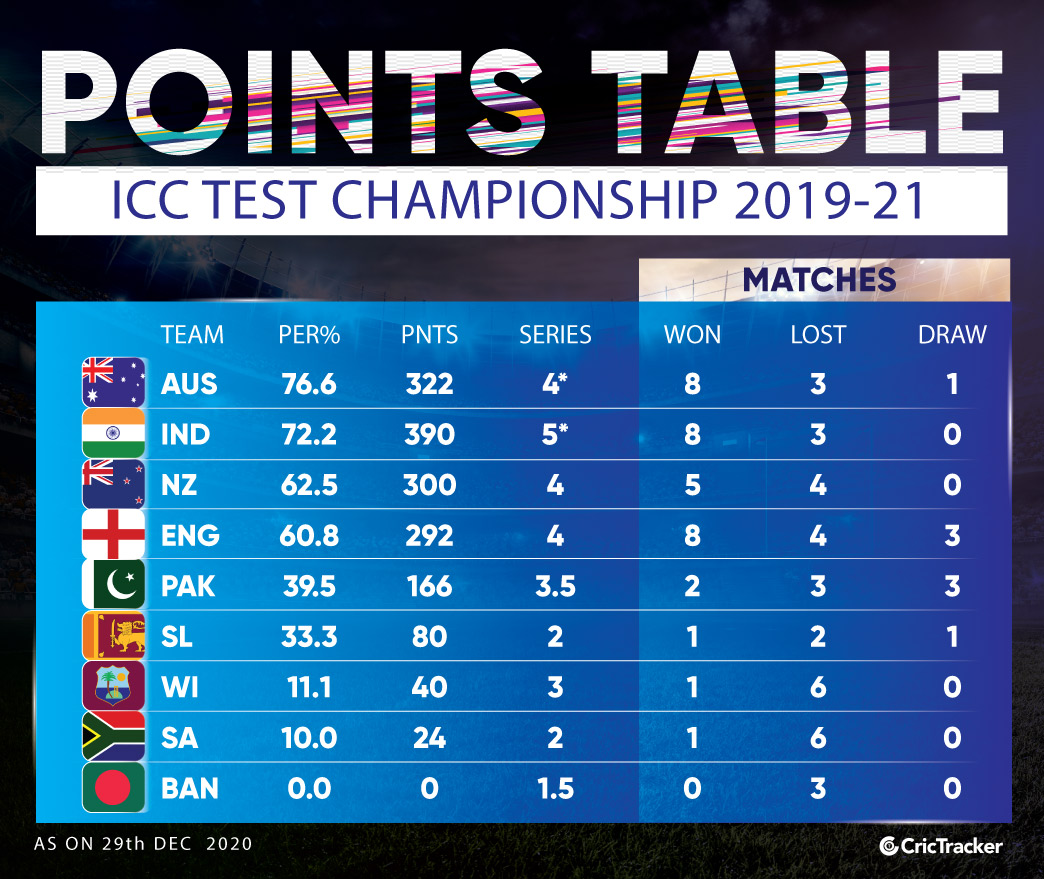