Pujara, after surviving the call, went on to score 50 runs. 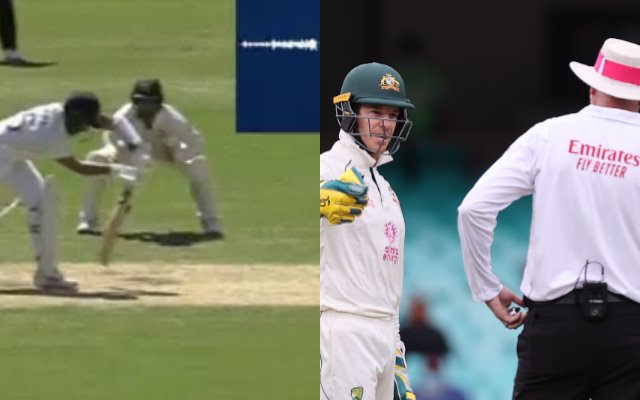 Australian skipper Tim Paine wasn’t a happy man after Indian batsman Cheteshwar Pujara survived an agonising bat-pad call on the third day of the Sydney Test. In the 56th over of the innings, Pujara went for a defensive stroke off Nathan Lyon after which the ball lobbed to the short-leg fielder. Lyon bowled around the middle and leg-stump and Pujara didn’t have an answer to it.

However, on-field umpire Paul Wilson turned down Australia’s appeal. Quite immediately, the hosts went for the Decision Review System. But to their dismay, DRS went against them as well. The Snickometre and Hotspot didn’t show any evidence of an inside edge. Later, on checking any chances of LBW, the trajectory showed that the ball would have gone above the leg-stump.

Thereafter, Paine unleashed venom on the on-field umpire. As per reports, he also asked the umpire for some ‘consistency’. Pujara was batting on 13 at that point in time and he went on to score 50 runs off 176 balls with the help of five fours. It was fast bowler Pat Cummins, who found Pujara’s outside edge in the 89th over to end the latter’s stay in the middle.

On-field umpire Wilson said to Paine, “I am not the third umpire”. The Aussie skipper responded, “F**king consistency blocker! There’s a thing that goes past it.” Paine was clearly suggesting about a similar spike which for him he was given caught behind at MCG

Australia lose a review trying to prize out Pujara. Another fantastic decision by the umpire #AUSvIND pic.twitter.com/k1coiuhI1W

Pujara was India’s leading run-scorer in the first innings along with opener Shubman Gill, who also got a score of 50. Rohit Sharma, skipper Ajinkya Rahane, Rishabh Pant and Ravindra Jadeja got into the 20s and 30s, but none could convert their starts. In the end, the visiting team were bowled out for 244 in 100.4 overs, thereby conceding a substantial lead of 94 runs to the hosts.

For the Aussies, Cummins inflicted the most damage as he picked up four wickets. Apart from Pujara, he also accounted for the wickets of Gill, Rahane and Mohammed Siraj. The other fast bowlers Josh Hazlewood and Mitchell Starc picked up a combined tally of three wickets.

Lyon couldn’t add to the wickets’ column after toiling hard for 31 overs. In the first innings, it was Steve Smith’s 131 that lifted the hosts to a formidable score of 338 runs and he got the apt support from Marnus Labuschagne, who scored 91 runs at number three.