New Zealand have won their last three ODIs while Australia have lost five on the trot.

Two months is a long time in International cricket. Such is the frenetic nature of the Future Tour Programmes, that a lot can change within a space of a few days; let alone two months. Two months. Yep! This is precisely the period post which the Trans-Tasman rivals will once again lock horns in a series of white-ball Internationals; starting with the first of the three ODIs at the iconic Sydney Cricket Ground on Friday.

The last time these two sides met, the Kiwis were shellacked to the tune of 0-3 in the Test series with the Kane Williamson-led unit failing to field 11 fit cricketers on the field. But, since then, a lot of water has flown under the bridge. The BlackCaps suffered another whitewash in the home series against India where they were beaten 0-5 in the T20I rubber.

However, they scripted a miraculous comeback in the following ODI and Test series which they won by 3-0 and 2-0. The Aussies, on the other hand, lost back-to-back ODI series against India and South Africa, and are on a five-match losing streak as far as the 50-over format is concerned.

That said, as New Zealand would know, Australia are a different beast in their home conditions. They are yet to be beaten in their own den this summer and will be looking to extend their streak and emulate their exploits of 2009-10 when they finished the entire summer without having dropped a game.

The Chappell-Hadlee Trophy has changed hands six times- with the BlackCaps currently holding the silverware- since its inception in 2004 and the upcoming rubber has retro flavour attached to it with both teams set to don the kits of the erstwhile era.

Sydney has endured a lot of rain in the past 10-15 days but that is not expected to be the case on Friday. Bright and sunny conditions are expected to greet both sides and their fans at the SCG on Friday with the temperatures fluctuating between 11 and 24 degrees celsius.

As far as the pitch conditions are concerned, Sydney has traditionally been a belter of a track for the batsmen but it tends to get slow and aids spinners as the game wears on.

Captain Aaron Finch revealed in the pre-match presser that ace fast bowling pair of Pat Cummins [who was rested from the last ODI in South Africa] and Mitchell Starc, who missed the final ODI in order to attend the Women’s T20 World Cup final at the MCG, is all set to make their comeback into their starting XI.

Finch also revealed that he is looking at the trio of Labuschagne, Mitchell Marsh and D’Arcy Short to fulfil the role of the fifth bowler, which means that the Aussies may go in with just one spinner in Adam Zampa.

The Kiwis were plagued with injuries and sickness during the Test tour Down back in December. But that is no longer the case now. With the likes of Trent Boult, Lockie Ferguson all fit and firing, the BlackCaps will have a happy headache in choosing the makeup of their fast bowling unit.

As far as batting is concerned, Henry Nicholls and Martin Guptill will spearhead the opening unit followed by the trio of Kane Williamson, Ross Taylor and Tom Latham forming the backbone of the middle-order. Colin de Grandhomme, James Neesham will serve as seam-bowling all-rounders. 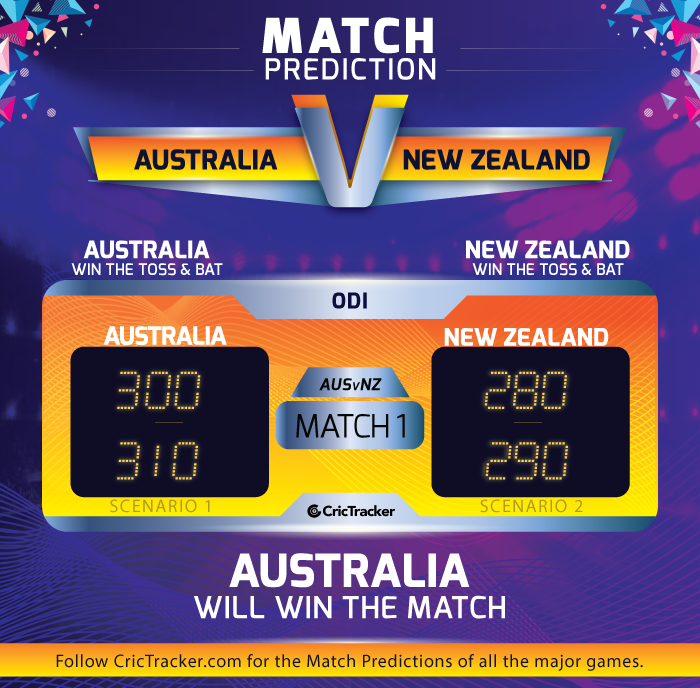