Pat Cummins has been rested from the third T20I.

Being the number one ranked T20I team, Pakistan are on the verge back of back-to-back series defeats, remaining winless in both of them. The tour of Australia has been a tough one for them. After the heavens came to their rescue at the Sydney Cricket Ground, the Men in Green tasted a seven-wicket loss at the Manuka Oval in Canberra. Both of Babar Azam’s half-centuries went in vain.

The third T20I is set to be played on Friday, November 8 at the Perth Stadium and all Pakistan could do is evade a series defeat. The Aussies, on the contrary, haven’t looked fussed by any means. After rolling over Sri Lanka, Aaron Finch’s men haven’t done much wrong. In fact, another victory for the hosts would take the Aussies to 269 T20I rating points, only one point less than that of Pakistan.

The pitches in the last five T20Is in the Aussie summer have produced some fairly high-scoring affairs. The track in Perth is likely to be similar. The venue is yet to host a T20I. In the last BBL, the highest score recorded was 182 and the average score was the 150-mark. The conditions will be bright and sunny with the temperature around 28 degrees. The humidity will be in the 20s.

The Aussie batting in the last five games has mostly been about their top order. One of David Warner, Aaron Finch and Steve Smith have always put their hands up. In fact, Warner was dismissed for the first time in five matches. Last time, it was Smith, who churned out an 80 and helped his side chasing down 151. Ashton Turner, Ben McDermott and Alex Carey can also hit the leather.

In the bowling department, Pat Cummins has been rested for the last game and it’s likely that Billy Stanlake will replace him. Sean Abbott may come in his place. Richardson was taken to the cleaners in the death overs by Iftikhar Ahmed. Adam Zampa troubled the Lankans, but surprisingly, is the only wicket-less bowler for Australia in the series. Starc and Agar have been tough to get away.

It goes without saying that Babar has stood tall for the Men in Green amidst the storm. The skipper averages 109 at a strike-rate of 143.42. It required a direct hit from Warner to get him out in Canberra after he stayed unbeaten at the SCG. Iftikhar floundered at the SCG, but stomped out all guns blazing, scoring 62 off 34. His knock was laced with five fours and three colossal sixes.

Fakhar is going through a nightmare in T20Is for the last one year. The visitors may give Imam-ul-Haq an opportunity. Imam isn’t belligerent like Fakhar, but can keep the scoreboard ticking. Haris Sohail needs to work on his technique of playing the short balls. In bowling, Irfan came back , picking Finch’s wicket, giving away 27. Shadab didn’t get a wicket, but had an economy of 6.25. 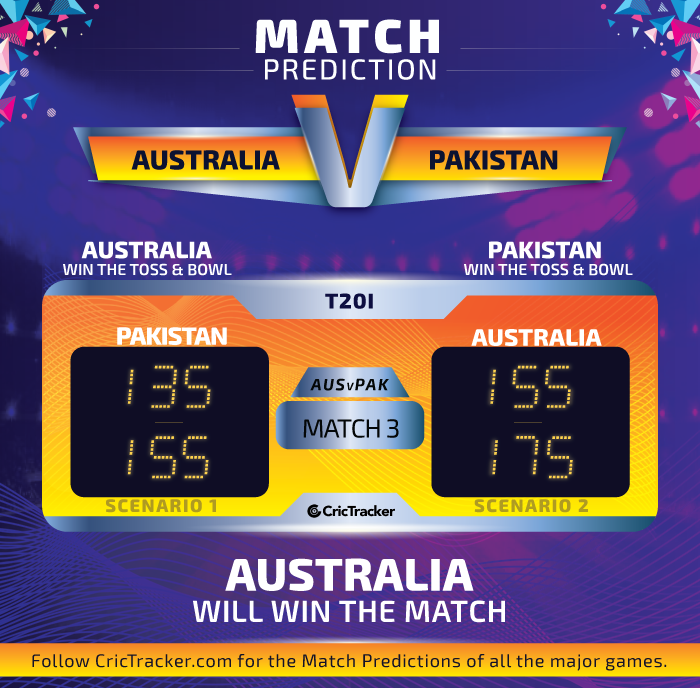