It would be better to wait for Sri Lanka's XI to be announced. They are certain to make a few changes.

The 2nd T20I of the three-match series between Australia and Sri Lanka will be played at The Gabba in Brisbane.

Sri Lanka landed in Australia on the back of a stunning 3-0 win over Pakistan. They were extremely confident coming into the series and almost defended 131 against Prime Ministers XI. But come the series opener, the familiar Sri Lanka of the past two years turned up. After opting to bowl first, they let Australia’s openers David Warner and Aaron Finch off the hook to concede 233 runs in 20 overs.

They were never going to chase it down but finishing on 99/9 after 20 overs was bigger embarrassment for them. The second T20I at The Gabba is a must-win encounter for them and no wonder Australia are the favourites. Lasith Malinga has got to motivate his troops somehow and hope that they put up a good show and give the hosts a run for their money.

The conditions in Brisbane will be gloomy all day in the lead up to this match. But at no time, rain is expected to come down. Rather the cloud cover will decrease by 6 PM to make way for the encounter to take place unscathed. The temperature will hover in the early 20s according to AccuWeather.

The surface at The Gabba generally has bounce in it and carries at waist height to the keeper. The batsmen also thrive on the same to score runs and a good contest is expected. A total of four T20Is have been played at the venue so far and the scores have generally been on the higher side. The team winning the toss is expected to bat first.

Mitchell Starc is unavailable for the second T20I. He is away to attend his brother’s wedding. Either Billy Stanlake or Sean Abbott will replace him in the XI.

Aaron Finch and David Warner got Australia off to a great start in the previous game. Both of them will earn crucial Fantasy points again and should be picked in your Dream11 Fantasy team. Glenn Maxwell is also important for the home team’s cause and can add quick runs.

For Sri Lanka, Bhanuka Rajapaksa and Oshada Fernando are important. They might play this game as well and must’ve got the idea of Australian conditions now. Lasith Malinga is a brilliant bowler and expect him to come back strong at The Gabba. 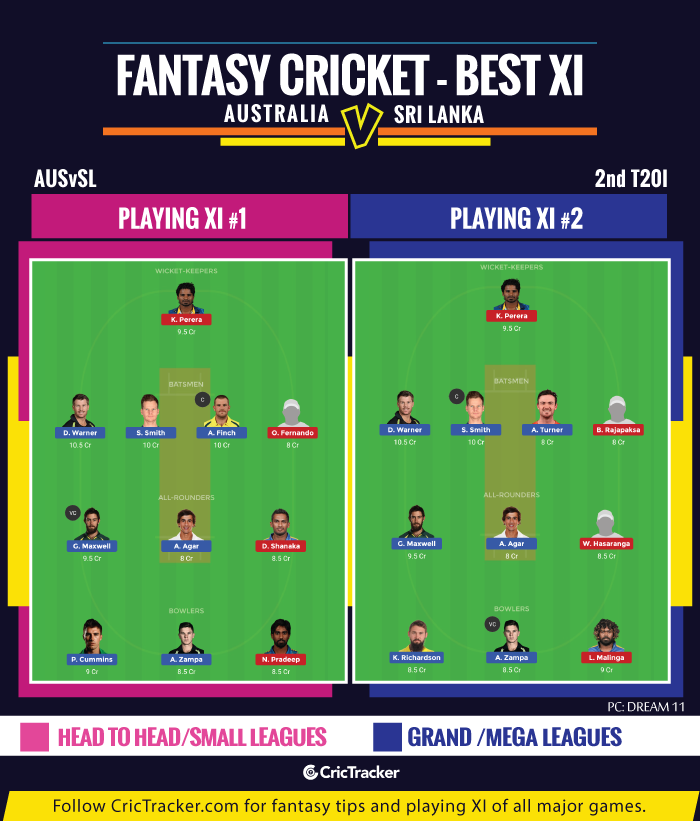 It would be better to wait for Sri Lanka’s XI to be announced. They are certain to make a few changes.

Also, if Sri Lanka bat first, there is no point in picking more Australian batsmen as the visitors might not score more than 150 given Australia’s bowling is extremely strong.

Australia are expected to win and seal the series with one game to go.