Irrespective of the low score in the last game, Alyssa Healy will continue to be crucial as captain or vice-captain.

The 2nd game of the 3-match ODI series between Australia Women and Sri Lanka Women will be hosted by the Allan Border Field in Brisbane.

Australia Women extended their winning streak in ODI format to 16 matches as they defeated Sri Lanka by a huge margin of 157 runs. After electing to bat first, the hosts lost an early wicket in the form of Alyssa Healy who was fresh of a record score in Women’s T20Is. Fifties from Rachael Haynes (56), Meg Lanning (73) and Beth Mooney (66) ensured Australia Women finished with 281/8 in their 50 overs.

As expected the visitors were well behind the required rate. In fact, only one batter managed to score runs at more than 70+ strike rate. Ashleigh Gardner recorded figures of 9-4-9-2 which includes the wicket of the skipper Shashikala Siriwardene who top-scored who top-scored with 30 runs. They were finally bundled out for just 124 runs as the Aussies got their 4th straight ODI win by 150+ runs while batting first.

There will be clear skies at the Allan Border Field on Monday throughout the game. In fact, the temperatures will be on the higher side and would keep the pitch dry.

The first match showed how good the Allan Border Field was for the batters. Even most of the 2nd innings offered nothing for the bowlers. It was Sri Lankan team’s quality that cost them the game. There was a hint of help to the spinners in the 2nd half of the chase.

The all-rounders in the Australian team – Ellyse Perry, Ashleigh Gardner and Jess Jonassen are crucial in the fantasy team. The bowlers will be important if Sri Lanka bats first and the batters if the hosts will bat first. Australia Women won each of their last four ODIs while batting first by a margin of 150+ runs. This shows the sort of domination they have put up whenever they batted first this year.

Irrespective of the low score in the last game, Alyssa Healy will continue to be crucial as captain or vice-captain. 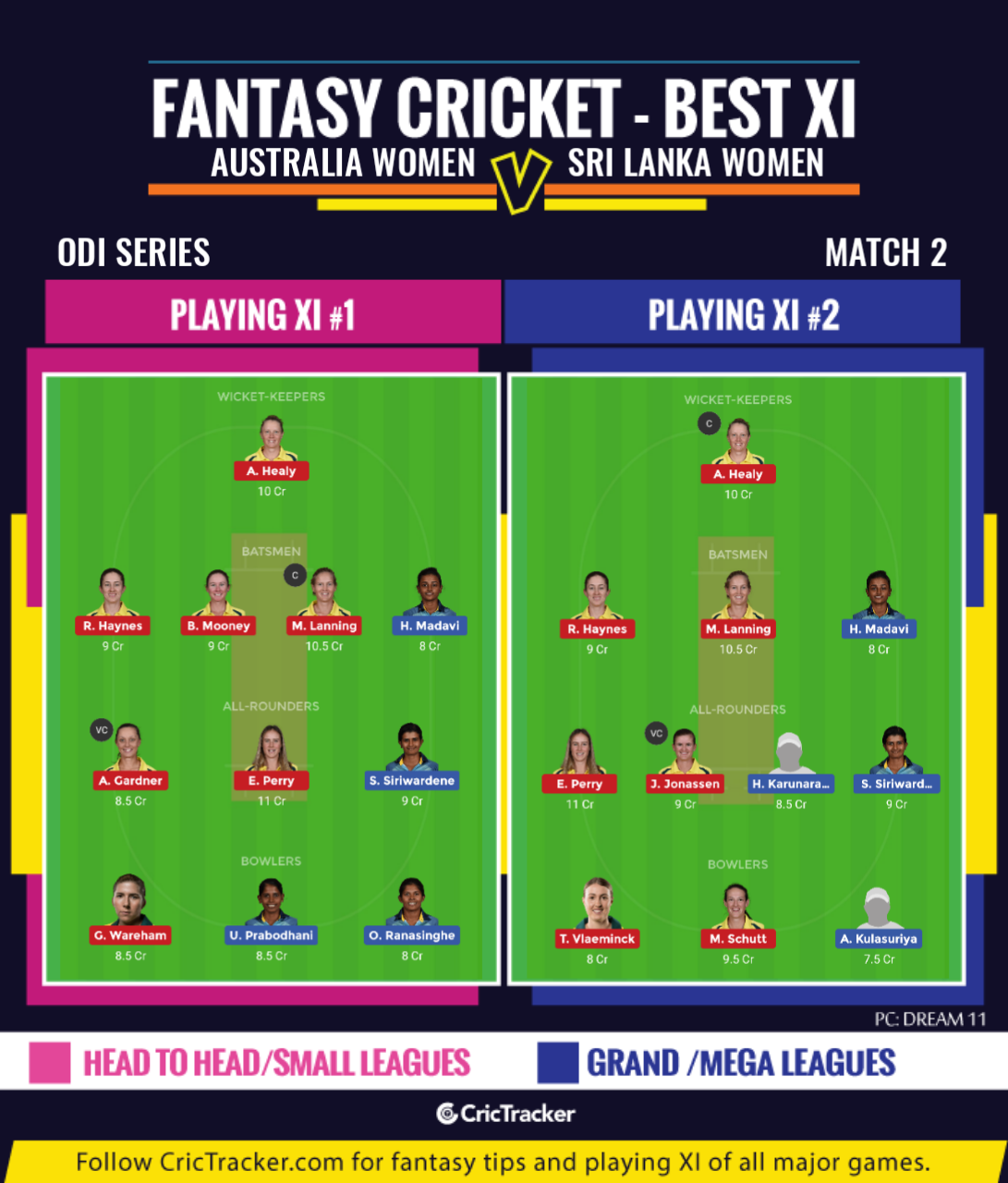 Chamari Atapattu’s career can be defined by her performances in this tour. She has produced a big knock once in a while and followed it with low scores. Spending 9.5 credits on her won’t be the right idea when there are better options. Ellyse Perry hasn’t found the right way with the ball. She might not get a chance to bat long due to an in-form top three. Not making her captain/vice-captain will be a gamble which can work but putting out from fantasy team could end up being a costly move.

Australia Women are likely to seal the series with their 2nd straight big win.