Gardner batted at number three in the previous game and she could be a good pick in Dream11 Fantasy in case she is promoted again in the batting order.

The 3rd match of the Australia Women’s Tri-Nation T20I Series, 2020 will be played between Australia Women and England Women at the Manuka Oval in Canberra.

Women’s T20I tri-series involving India, England and Australia has got off to a great start with the first two matches going down the wire. While the Harmanpreet Kaur-led side got over the line in the series opener, England prevailed in a thrilling super over against the hosts. Australia Women will now face India in the third match of the tournament which also completes the first round of games.

Meg Lanning and her side will be disappointed that they failed to chase down 157 against England despite a brilliant knock from Beth Mooney. India, on the other hand, will be delighted to see their out of form skipper finally spend some time in the middle. The two teams will face off in the World Cup opener as well on February 21 and this is the time to gain the psychological advantage.

The weather forecast on Sunday in Canberra is absolutely clear with no chance of rain. The temperature will hover around 32-34 Degrees Celsius during the match according to AccuWeather.

The first two matches at the venue has proved that a score around 150-155 is par. The surface is also expected to be slower which will suit the Indian team. The team winning the toss is expected to bat first which hasn’t been the case in the first couple of games so far.

Pooja Vastrakar sustained a hamstring injury in the previous game and might not play this match.

Healy’s poor run of form with the bat continued against England. But she is the player you would want to have in your Dream11 Fantasy team. Mooney also got a crucial half-century (65) in the previous game and is in very good form. Perry, with her all-round skills, becomes a must-have player in your Fantasy XI. With the ball, Wareham and Schutt could make an impact.

Smriti Mandhana has scored 218 runs in six T20Is against Australia at an average of 43.60 and will be crucial for India again. Harmanpreet Kaur bats at four and also rolls her arm for a couple of overs at least which makes her a must-have player in Dream11 Fantasy as well. Rodrigues played well with the bat in the previous game scoring 42* off 34 in the chase. With the ball, Deepti and Gayakwad will most likely pick wickets. 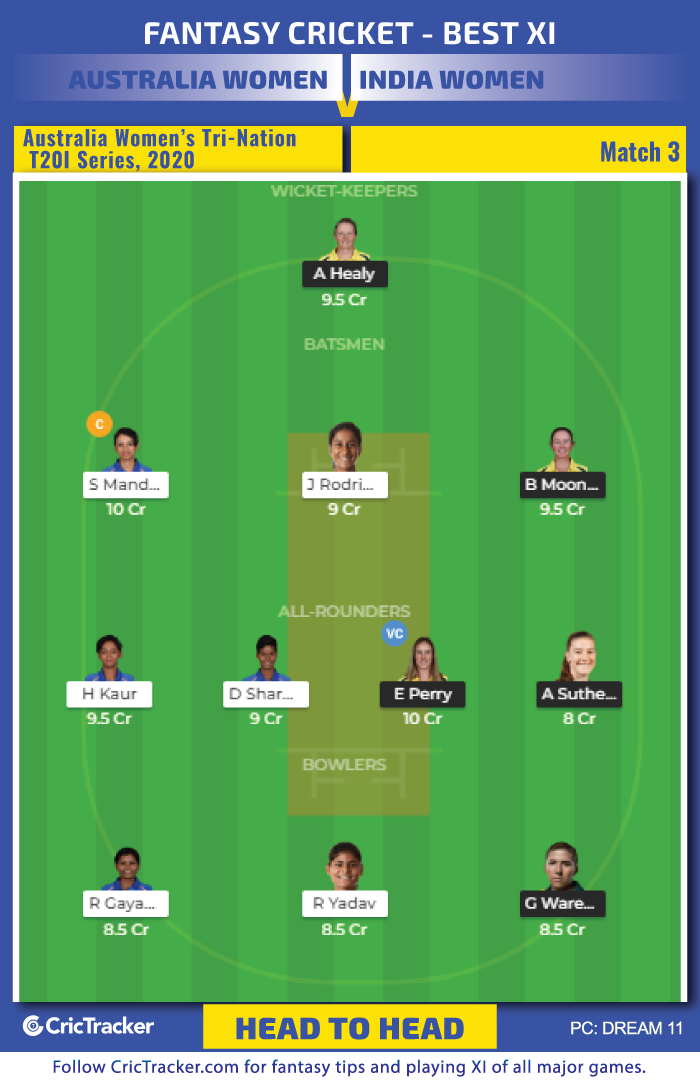 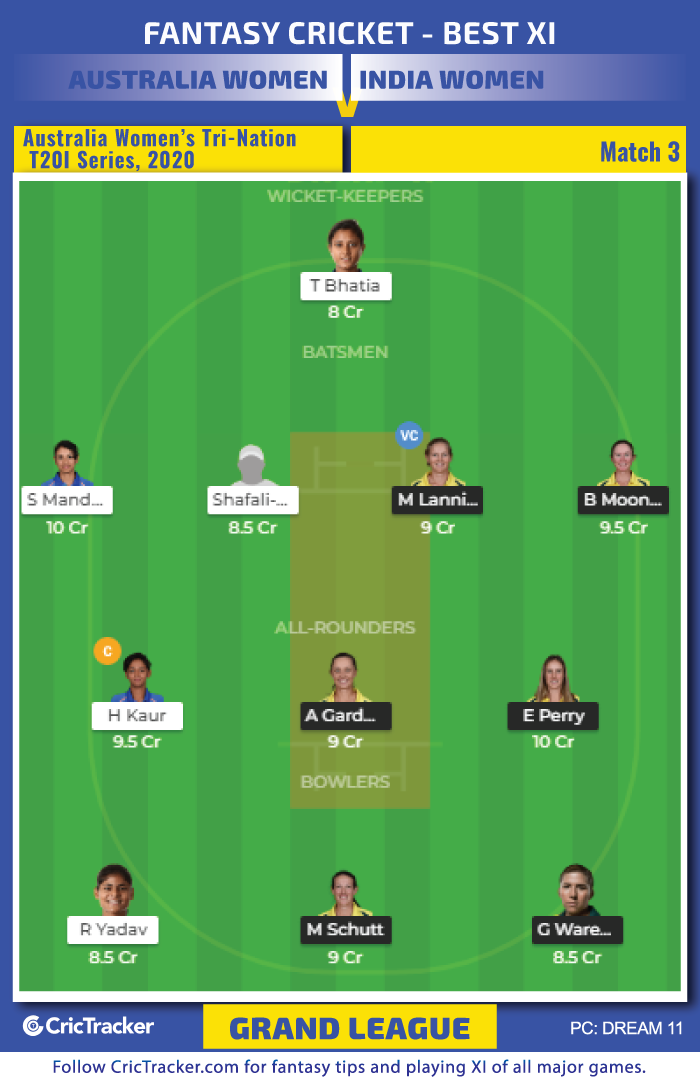 Annabel Sutherland picked in Head to Head team is only to make the other picks possible. Instead, other options for you to go in place of her are Shafali Verma. But for that, you will have to remove Jemimah Rodrigues and pick a bowler with 8.5 credits.

Gardner batted at number three in the previous game and she could be a good pick in Dream11 Fantasy in case she is promoted again in the batting order.