Shakib Al Hasan is a good captaincy option for this rubber. 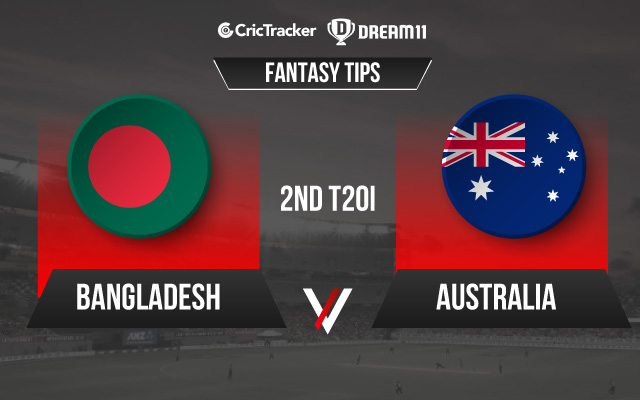 Bangladesh got the better of the Australian side in the first T20I, which was held on 3rd August 2021. In a low-scoring match, Bangladesh batted first and posted 131/7 on the board. In reply, Australia were bowled out for a total of just 108 runs.

The Aussies will need to regroup quickly ahead of the 2nd T20I. Their batting floundered in the first T20I, and except Mitchell Marsh, none of their other batsmen could even cross the 20-run mark. While Bangladesh will be looking to take an unassailable 2-0 lead, the kangaroos will look to get back to winning ways.

As was evident from the first T20I, run-scoring will surely be a challenging task on this surface. The spinners will have a massive role to play, and we can expect another low-scoring contest.

Mahmudullah scored a valuable 20 for the Bangladesh side on a track that was very difficult to bat on. He is an experienced batsman who has scored close to 1600 runs in T20I cricket and is a player on whom Bangladesh can bank on.

Mohammad Naim Sheikh played a good hand yesterday. In what was a nightmarish track for the batsmen, he managed to score 30 runs.

Mitchell Marsh was the top scorer for the Australian side in the first T20I. He scored a run-a-ball 45 and was the only Aussie batsman who took the fight to the Bangladeshi side.

Shakib Al Hasan underlined his worth for his side by scoring a 33-ball 36 in the first T20I. Shakib was tidy with the ball too and scalped a wicket in the 4 overs that he bowled, giving away 24 runs.

Nasum Ahmed bamboozled the Aussie willow wielders with the ball in hand. He bowled 4 overs, gave away 19 runs, and picked up 4 wickets as well.

Josh Hazlewood produced an excellent performance with the ball in the first T20I against Bangladesh. The right-arm pacer leaked only 24 runs in the 4 overs that he bowled, and also scalped 3 wickets as well.

Mustafizur Rahman will be another good budget bowling pick. He picked up the wickets of Ashton Turner and Mitchell Starc in the first T20I.

Matthew Wade is a dangerous batsman if he gets going. He has a career strike rate of close to 130 in T20Is and is a batsman who can take the game away from the opposition.

BAN vs AUS Must Picks in Dream11 Fantasy Cricket

Mitchell Starc is a bowler who can destroy any batting lineup on his day. He also happens to be the highest wicket-taker for the kangaroos in T20I cricket. He can be a good risky captaincy pick.

Nurul Hasan has an ordinary record in T20Is and has not yet proven himself at the highest level. You can avoid him from your fantasy teams.